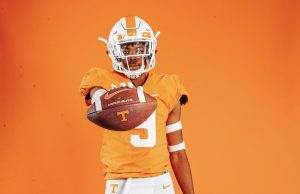 The highest-rated defensive recruit in Tennessee’s 2023 class, Chandavian Bradley, is fired up about his future with the Big Orange.

The four-star EDGE rusher committed to Tennessee back in mid-July and has been one of the loudest voices in the Tennessee recruiting class since. The 6-foot-4, 220-pound defensive lineman is currently ranked by 247 Sports composite as the No. 65 overall player in the class, the No. 8 EDGE rusher in the class, and the No. 2 player from the state of Missouri.

On Friday night, Bradley’s Platte County Pirates defeated North Kansas City by a score of 25-14 in a Friday night lights matchup. After the game, Bradley caught up with Rivals’ national recruiting analyst Clint Cosgrove and spent a few minutes talking about his future with Tennessee.

Bradley had a terrific game for Platte County on Friday, and will certainly be receiving a shoutout on this week’s Rocky Top Insider Press Pass podcast. The way Cosgrove and Bradley unofficially figured during the video, the Tennessee commit had two strip sacks, one safety, one blocked punt recovery, a few tackles for loss, and even hauled in a 38-yard touchdown pass from quarterback Dylan Zimmerman. It’s safe to say that Bradley’s range of athleticism was on full display during the game.

With the victory on Friday night, Bradley’s Pirates picked up their first win of the season. The Tennessee Volunteers, Bradley’s future team, also found a victory in their season opener against Ball State by a score of 59-10. While talking to Cosgrove, Bradley spoke about how much fun he had watching the Vols open the season with a sizable victory.

“I’m glad I get to talk because I’ve been talking to a few guys that are committed and some guys that are already on the team,” Bradley said to Cosgrove. “They went and balled out [against Ball State]. I texted one of our punt returners, I was like, ‘Hey, go ball out for me.’ And what do you know, they all balled out of us. I mean, the 59-10 win is obviously a huge win. No matter who you’re playing against, that’s going to be a big win. So I’m just glad to see that my boys balled out and I’m ready to get down there.”

Bradley comes across as a very well-spoken young man – or rather, “Young King” if you go off of his Twitter handle. But current players and commits aren’t the only people that Bradley is talking to. He’s also still recruiting for the Big Orange during the season.

“Daevin Hobbs, still looking out for him,” Bradley said to Rivals while naming players that he is actively targeting for Tennessee. “I’m trying my best, seeing if I can get T.J. Searcy to flip. Just doing my best to do whatever I can.”

Speaking of the two players that Bradley mentioned. Hobbs is a 6-foot-4, 262-pound four-star defensive lineman from Concord, North Carolina. While the Tar Heels currently look to be the leaders for Hobbs’ commitment, Tennessee is still one of the top teams on the board. On the other hand, Searcy is a four-star Florida commit under new head coach Billy Napier. Tennessee was in the running for the 6-foot-5, 250-pound defensive lineman from Thomaston, Georgia before his commitment to the Gators.

While the Tennessee commit is planning on attending the Tennessee/Alabama game in Neyland Stadium this October, Chandavian Bradley also told Clint Cosgrove that he was hoping to also make it over to Knoxville when the Vols host his home-state team, the Missouri Tigers, in mid-November.

Check out the full three-minute interview with Bradley and Rivals’ Clint Cosgrove below.

Four-star EDGE Chandavian Bradley (@chandavian23) remains locked in with his commitment to Tennessee.

I caught up with him to talk Vols and more: pic.twitter.com/hwYfMD3CCE