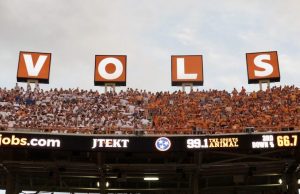 The Tennessee Volunteers remain in the Top 10 heading into week six. Photo by Ric Butler/RTI.

Tennessee’s bye week is officially in the rearview mirror as of Sunday morning, and the Vols’ spot in the AP Top 10 poll has not changed.

After entering the bye week as the No. 8 ranked team in the AP Top 25, Tennessee still sits at No. 8 in Sunday’s week six rankings.

Week five was undoubtedly a wild week in college football, with only five of the Top 10 teams remaining in their same spots. Alabama now sits as the nation’s No. 1 team after defeating then-No. 20 Arkansas, meanwhile, Georgia fell from No. 1 to No. 2 after just barely squeaking out a road win over Missouri.

Oklahoma State, who started the weekend at No. 9, was the only team to jump Tennessee on the bye week. The Cowboys moved up two spots to No. 7 after a victory over then-No. 16 Baylor.

Ole Miss was a big mover over the weekend after their home victory over then-No. 7 Kentucky as the Rebels move up five spaces to No. 9 in the country. And lastly, Penn State is now rounding out the Top 10 after a 17-7 victory over Northwestern.

In addition, despite not playing on Saturday, Tennessee actually moved up one spot from No. 9 to No. 8 in the USA Today Coaches Poll.

Tennessee now turns their attention to a week six road game against LSU. After the Tigers’ 21-17 victory over Auburn on Saturday, LSU now sits at No. 25 in the AP Top 25 and is unranked in the USA Today Coaches Poll.

No. 8 Tennessee at No. 25 LSU is the only ranked matchup on the SEC slate this weekend.