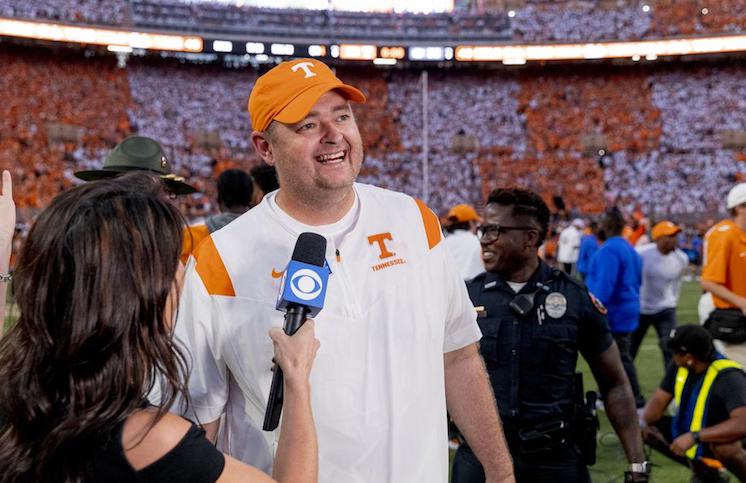 No. 8 Tennessee heads on the road this week to face No. 25 LSU in Baton Rouge. It’s the Vols’ first road matchup against the Tigers since the infamous 13-men on the field game in 2011.

LSU enters the matchup 4-1 (2-0 SEC) with come from behind wins over Auburn and Mississippi State and a lone loss to open the season against Florida State.

The Tigers have a similar offensive identity to the Florida team Tennessee just faced. Quarterback Jayden Daniels is a strong runner but an inconsistent passer. LSU’s defense has been strong to this point in the season but has shown some weakness in pass defense.

More From RTI: Tennessee Corner Out For The Season

“There are areas that we have to grow that will show up again in this game. For us defensively, it’s the eyes, keys, tight ends are exiting in the formation. That will be critical in this football game. The quarterback run absolutely is a huge part of the football game. That can be in some read game, but also just as the pocket breaks down or he goes through his progression, his ability to escape. The way they finish runs is probably a little bit different just in their style. But absolutely, the mobility of the quarterback is a huge part of us having to defend that in this football game.”

On LSU’s ability to come from behind and win

“Well just for us, you have to understand that if you’re up on the scoreboard, it doesn’t matter. We talk a lot about playing it 0-0 for 60 minutes. The way they play and compete no matter what the scoreboard looks like, you have to be prepared for their best for 60 minutes. They are a resilient team. They’ve done a really good job of creating turnovers, making special teams plays, creating short fields and flipping the way the game is played here. You can see that from week one all the way through this past week.”

On the challenges LSU’s defense presents

“The front four are big, physical, long, athletic, and they have the ability to apply pressure to the quarterback and break the pocket down. You want to stay out of long-yardage situations against them. On the back end, they have a bunch of new bodies to their roster with a bunch of transfers. Those guys have played a lot of football. I think they continue to get more in sync and more comfortable in their scheme. For us, we have to have balance in what we’re doing, so run game on early downs will be critical. Playing from ahead of the chains is going to be critical in this game.”

On how Tennessee’s receivers matchup against LSU corners

“You’ll see press-man at times, but you see a bunch of coverage variation from them too. Hendon’s got to do a great job of identifying the rotations. Our receivers have to do the same thing. When it is man-to-man, you have to find a way to go win. You guys have seen us since we’ve gotten here. We’re going to try to put those guys in a position to win, but we also trust those guys to go win in those situations.”

On is he likes the 11 a.m. local kick off for the LSU game

“If you ask coaches everywhere, they say give me the earliest kickoff possible. For us, it’s going to be a great environment. I’m sure it’ll be a packed house. This is a tough place to play, but it’s so much about us and our preparation (and) making sure that we handle things the right way. We have to take care of the football, we can’t have penalties. You can’t do things that hurt yourself in this football game. It’s a really good team that we’re playing.”