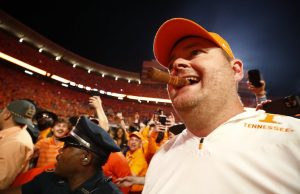 After an undefeated 6-0 start to the season, the Tennessee Volunteers football team continues to climb in the rankings. On Saturday afternoon in Knoxville, No. 6 Tennessee took down No. 3 Alabama by a score of 52-49 after a game-winning field goal from Chase McGrath as time expired.

Following the win over Alabama, Tennessee has risen to the No. 3 ranking according to the week eight AP Top 25 poll.

This is Tennessee’s highest AP Poll ranking since the Vols came in at No. 3 in the 2005 preseason.

In addition, Tennessee also received 15 first-place votes in the poll.

Tennessee has jumped over Alabama and now only trails Georgia from the SEC, who remains the No. 1 team in the country. Ohio State comes in at the second spot in the rankings.

The Vols’ 15 first-place votes only trail Ohio State’s 17 votes and Georgia’s 31 votes. It’s safe to say that Tennessee is pounding on the door emphatically.

Additionally, even though Michigan found a sizable win over then-No. 10 Penn State on Saturday, Tennessee jumped the Wolverines in the rankings, who now sit at No. 4.

The Vols have been on the rise every week since the start of the season. It has been quite an impressive climb, really. Tennessee began the season unranked in essentially the “No. 26” slot. After the first week, the Vols came in at No. 24, then No. 15, then No. 11. By the time week five rolled around, Tennessee was up to No. 8, where they stayed for two weeks. The Vols were up to No. 6 after defeating LSU, and now No. 3 after beating Alabama.

Tennessee has also risen in the USA Today Coaches Poll on Sunday. After being ranked No. 8 in the coaches poll last week, Tennessee has cut that in half and is now sitting at No. 4.

Being a top-four team in the rankings does not guarantee a spot in the 2022 College Football Playoffs, but it does put Tennessee squarely in the middle of the conversation. After Tennessee’s win against LSU, the Vols were on the outside looking in. Now, though, Tennessee is in those talks.