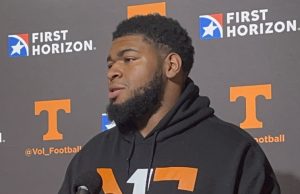 The Memphis connection is strong between Omari Thomas and Kennedy Chandler.

During his Monday press conference following the victory over Alabama on Saturday, Tennessee defensive lineman Omari Thomas wore a KC1 sweatshirt as a nod to his long-time friend and VFL Kennedy Chandler.

Thomas’s black sweatshirt has the KC1 logo in orange and white lettering in a very modern and stylistic design.

For a little over a year now, Thomas, Chandler, and Tennessee running back Jabari Small have been known as “The Memphis Trio.”

The three Volunteers grew up together in Memphis and have played sports together throughout their whole lives. It’s only fitting that the three all went to the same school and kept that friendship alive and strong.

“I think I’ve been to every home game for Kennedy,” Small said in a video of the three while playing a game of P-I-G, or in this case, V-O-L. “It’s cool to see him do what he loves and excel at it. So it’s pretty cool.”

“I make sure they get tickets to every single home game,” Chandler followed up with. “Going to a football game is nice, too. Ya know? Sitting in the student section. I didn’t think it would ever happen – us going to the same colleges. It’s nice to know we’re at the same college now.”

While it was a brief one-year stretch for the three friends together in Knoxville, clearly, the bond is still strong.

After one dynamite season in Knoxville, freshman phenom Kennedy Chandler eventually took his talents to the NBA Draft, winding up back in Memphis as a selection for the Grizzlies.