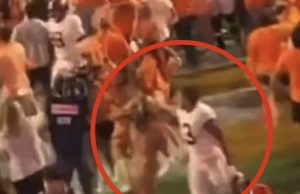 An unfortunate incident allegedly occurred during the postgame celebration after Tennessee’s win over Alabama on Saturday.

The story regarding Alabama wide receiver Jermaine Burton allegedly making contact with a Tennessee fan during the postgame celebration has continued to gain steam on Wednesday morning. The video was originally released by Tik Tok user Emily Isaacs on Tuesday evening and appears to show her incident of getting shoved by Burton in slow motion.

The video shows Isaacs making her way across the south endzone towards the field, presumedly coming from the Tennessee student section or a surrounding area. The incident looks to occur just behind the checkerboard section of the endzone.

“Jermaine Burton smacking me in the head while walking past him after their loss Saturday,” Isaacs said in the caption.

Isaacs’ video was then screen recorded and posted to Twitter by Legends of Lindsey Nelson on Tuesday at 6:00 p.m. ET. Since being posted to Twitter, the video has garnered more than 850,000 views in the first 18 hours.

Jermaine Burton smacking a girl in the head after the game pic.twitter.com/6DeqPYJ5WK

“We are aware of the situation with Jermaine Burton as he was exiting the field Saturday,” the release stated. “We are currently working to gather more information.”

Additionally, Saban also briefly addressed the situation during his Wednesday morning phone call on the SEC Coaches teleconference. Saban was asked about his thoughts on the idea of storming the field considering how frequent of a thing it is following Alabama losses.

According to Outkick’s Trey Wallace on Wednesday, Isaacs had no further comment on the incident and there is currently no further detail surrounding the video.

The Tik Tok account where the original video was posted has been switched to private.

Rocky Top Insider will update this story regarding any further details being released.