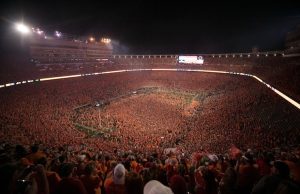 Tennessee has announced a sellout for this Saturday’s home game. Photo via Tennessee Athletics.

It’s pretty tough to keep the fans out of Neyland Stadium these days.

As Tennessee announced on Friday night, the Vols’ home game against UT Martin will be in front of a sold-out crowd. This will be the Vols’ fourth-straight announced sell out contest at 101,915 spectators.

The undefeated Vols have been on a tear to start this season and Tennessee’s fans have been packing the house to see their team play. Ever since Tennessee’s overtime win against Pittsburgh, tickets have been extremely hard (and pricey) to come by.

In late September, Tennessee announced that the night game next weekend against Kentucky will also be a sellout.

In addition to the home attendance number this year, the Vols have also been one of the nation’s top television draws. Last week’s game against Alabama peaked at nearly 17 million viewers on CBS, making it the most-watched college football game of the season so far.

Here are Tennessee’s attendance numbers in Neyland Stadium through the first four home games of the season: