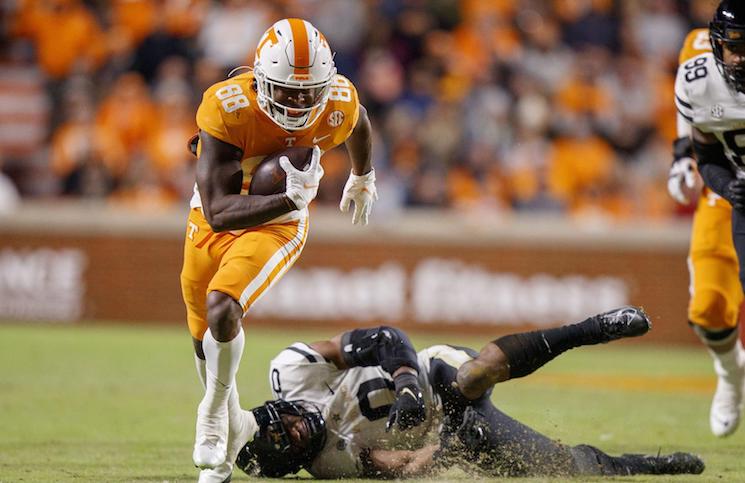 Joe Milton III checked into the game late in the first half with Tennessee leading 45-7 against UT Martin. Conservative play calling — or at least not aggressive play calling — was expected with such a lopsided lead. Josh Heupel had other ideas.

Jabari Small ran for two yards on the first play of the drive then Tennessee used some trickeration. Heupel drew up a double pass. Milton threw it in the flat to Princeton Fant and the tight end heaved it deep, hitting Jalin Hyatt right in stride for a 66-yard touchdown.

“He has the ability to throw it,” Tennessee head coach Josh Heupel said of Fant. “It was a special throw actually. They were bringing pressure. The ability to get it out of his hands quickly and throw an accurate ball to Jalin down the football field. Big play.”

The play worked beautifully, Hyatt was all alone behind the Skyhawks’ defense and Fant threw a beautiful ball. Hyatt may have even been too open as the star receiver bobbled the pass a handful of times before hauling it in.”

“I was able to watch Jalin catch it. I was so happy that he caught it and I’m proud of him,” Fant said with a laugh.

Tennessee’s had the play in the works for a while according to Fant and his quarterback ability has been a running joke between him and Tennessee coaches for some time now.

“I joke around in practice and throw it far,” Fant said. “(Quarterback) Coach (Joey) Halzle always be like ‘man, P you got an arm.’ We’re just having fun with it and whenever my number was called for it I was ready.”

Fant joked that he throws the best deep ball of any one on Tennessee’s roster before admitting that it’s really back up quarterback Joe Milton III.

The passing touchdown wasn’t the only time the tight end found the end zone against UT Martin. Fant ran a pair of fullback dives into the end zone including an impressive 11-yard run. Fant could have had the football cycle but dropped a Hendon Hooker pass in the first half.

Fant and the Vols return to the field next week when they face Kentucky at Neyland Stadium. Kick off is at 7 p.m. ET.