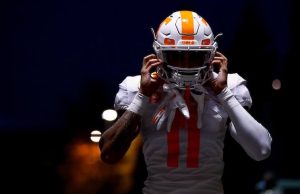 Jalin Hyatt has found the endzone a dozen times through the first seven games of the season so far.

Led by a jaw-dropping five-touchdown performance against Alabama in mid-October, Hyatt has certainly established himself as one of the top playmakers on Tennessee’s team and one of the top endzone threats around the country.

Tip of the cap to Saturday Down South’s Connor O’Gara for uncovering a pretty incredible stat regarding the first half of Hyatt’s season. Jalin Hyatt currently has more touchdown receptions than six SEC teams have receiving touchdowns in total.

More from RTI: Heupel Says No Change To McCollough’s Status Despite Independent Review Board Clearance

Hyatt began the season with three touchdown receptions in the Vols’ first four games. However, in the absence of Cedric Tillman due to injury, Hyatt has really stepped up to the challenge with nine touchdowns in Tennessee’s last three games.

Jalin Hyatt has been all over the place this season – not just the endzone. Hyatt is even showing up all over the Twitter timeline of NFL legend Chad “Ochocinco” Johnson.

My daughter has an official visit for Vols track in Knox next weekend, I’ll be at the game, have to get a picture w/ Hyatt before the game if they let me on the sideline. https://t.co/D7NknXSNp8