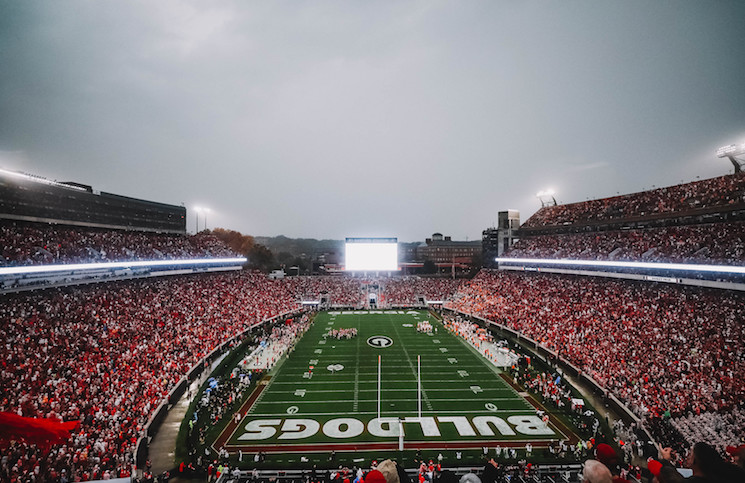 ATHENS, Ga — Rain moved in-and-out of Athens Saturday morning before the sun peeked through the clouds as Paxton Brooks booted the game’s opening kick off.

Forecasts projected the rain to be over but the clouds began to darken as Georgia opened up a 21-3 lead early in the second quarter.

As the Vols’ offense stalled in the second half, ending any hopes of a Tennessee comeback, the rain began to fall heavily on Dooley Field at Sanford Stadium just as Tennessee’s SEC east and College Football Playoff hopes did.

Georgia played the second half on cruise control, playing conservatively and running clock as the, 27-13, final score could have been much worse. Tennessee never pushed the Bulldogs as Georgia did all the work it needed to in the game’s opening quarter.

“Were we the best version of us?” Tennessee head coach Josh Heupel asked. “No. We weren’t. That’s why you see the things that happened early in the football game happen. False starts out on the perimeter. Miscommunication up front in protections. False starts up front. You can’t do that against a really good football team. …  We changed the way the game was played early in a negative way. We did that in all three phases.

The raucous crowd of 92,746 made life miserable for Tennessee’s offense. The Vols’ committed eight pre snap penalties including seven false starts in what was the loudest road environment any Tennessee player has played in.

“The crowd noise was effective,” receiver Jalin Hyatt said. “There were some times we couldn’t hear the snap call from Hook. Just give credit to their fans (on) how they came and disrupted what we did on offense today.”

Georgia’s defense did what no one has to Tennessee this season— completely suffocating the Vols’ high powered offense. Tennessee scored 21 points fewer than it had in any other game this season.

The Bulldogs held a strong Tennessee run offense to just 2.2 yards per carry and forced the Vols into third-and-longs with physical man coverage on the perimeter.

Once in third-and-long, Georgia pinned its ears back and got after Hendon Hooker. The Bulldogs entered the game with 10 sacks on the season. They sacked Hooker seven times in what was an eye opening poor performance from Tennessee’s offensive line.

“There were some things that showed up from film that appeared more often,” Heupel said. “We anticipated seeing a bunch of different looks from them. … I didn’t think all in all we handled the noise very well. That’s false starts. Getting safety. Getting communication upfront.”

Tennessee’s path to meaningful postseason football isn’t shut but it’s a whole lot thinner than it was at sunrise. Even with its playoff hopes alive, don’t tell Josh Heupel that all of Tennessee’s goals are still ahead of them.

“Getting to Atlanta (SEC Championship game) is a whole lot tougher now,” Heupel said. “That’s the number one goal inside of our program.”

The lopsided nature of Georgia’s win does Tennessee no favors either. With a close loss, Tennessee would be as attractive as any one loss team in the country. Only time will tell how the playoff committee assesses a 14-point loss that was really worse than that.

There’s a lot of football to be played this season and three playoff contenders — Alabama, Michigan and Clemson — are on the ropes at the time of publication.

Nevertheless, Tennessee did itself no favors on Dooley Field Saturday afternoon. As the rain fell so did the Vols’ SEC Championship hopes. They’ll have to pull themselves out of the mud to play meaningful postseason football this winter.