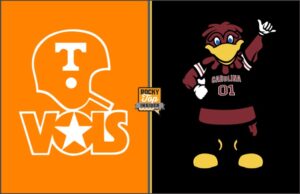 The Opponent: The University of South Carolina was founded as South Carolina College in 1801, and functioned mostly as a small liberal arts school for more than fifty years. General Sherman and the Union army spared South Carolina’s campus as they famously sacked the city of Columbia in 1865. In the Reconstruction Era, the school was renamed the University of South Carolina and began to take its current shape. Notable alumni include your run-of-the-mill career politicians and a fair amount of Confederate officers. South Carolina football does have one thing Tennessee does not, a Heisman trophy winner. George Rogers took it home in 1980. Does Tennessee play it differently around the goal line this week with Hendon Hooker still in contention? This game will be on ESPN, and will go up against a fairly soft primetime slate on the national networks. It is a good opportunity for #5.

Are they any Good? No, I don’t think South Carolina is any good. The Cocks will go bowling again, but absent of an upset win versus Tennessee or Clemson it will be a disappointing season in Columbia. South Carolina has wins against Georgia State, SC Upstate, and Charlotte in its non-conference schedule. In the SEC they have defeated Vanderbilt, Texas A&M and Kentucky with a backup QB. Those teams are 5-15 in conference overall. This is a volatile team. They lead the SEC in turnovers lost for the second straight year, but are also top four in turnovers gained. That means this South Carolina team has been involved in 39 total turnovers this season, by far the most in the conference.

What does Vegas Say? This line opened right around -20.5 and jumped up to -21.5 fairly quickly. It has stayed right there since, effectively making it the same line as Tennessee’s last game versus Missouri. Through seven SEC games, South Carolina has not been involved in one single lead change. That is a crazy stat, so make sure to watch out who scores first.

Matchup on Defense: Bring pressure. South Carolina leads the SEC with 23 total turnovers. This is a team prone to fumbling, and it features a quarterback who does a poor job handling pressure. Spencer Rattler was supposed to be the most transformative transfer quarterback in college football this season. How is that going? Fans calling for a return of Luke Doty under center should tell you all you need to know. Rattler has nine interceptions to just eight touchdowns on the year. Rattler is by no means a stiff, but he is not known as a running quarterback. Still, the Vols should be careful blitzing after letting Brady Cook rush for 106 yards last week.

The risk is worth taking against this Gamecock offense though. South Carolina could benefit from the return of MarShawn Lloyd & Christian Beal-Smith on Saturday. Those guys will certainly help in the run game, but that is a place where Tennessee continues to bottle up opponents. The goal will be to get South Carolina in third & long. To be fair to Spencer Rattler, he is playing behind a pretty poor offensive line. This opportunity has to get Tennessee’s pass rushers excited. Tim Banks won’t be afraid to go after Rattler thanks to a secondary playing with more confidence. Their play hasn’t been perfect, but it is clear that Tennessee has more faith in its cornerbacks than earlier in the season. Doneiko Slaughter has played great since the Kentucky game, and Brandon Turnage is consistently showing the talent that occasionally flashed last season. The Cocks do have a handful of long pass plays on the season, and Tennessee should expect the Kitchen Sink in this game. Still, the Vols need to attack this shaky South Carolina offense. They can’t play conservatively against a unit that didn’t score a single point in Gainesville last weekend.

Matchup on Offense: Run them over to set up the pass. Tennessee has a chance to really ground and pound this South Carolina defense Saturday night. The Cocks are coming off a game where Florida ran for over 370 yards on them. Shane Beamer admitted that Florida’s offensive tempo really gave South Carolina issues. This is a Gamecock defense that has been gashed on the ground a few times this season; both Arkansas and Vanderbilt ran for over 200 yards on the Cocks. Those two teams, along with Florida, have running quarterbacks. With Hendon Hooker included, the Vols have four real threats out of the backfield. Freshman Dylan Sampson reemerged against Missouri last week to the tune of 8 carries for 98 yards. Passing protection concerns aside, Sampson surely earned more carries this weekend. Tennessee needs to press the tempo, and rotate fresh legs into its backfield constantly. I wouldn’t be surprised to see Hooker flirt with 100 yards rushing, a mark he has cleared just once this year.

The reality is South Carolina’s front seven on defense have made very little impact this season. The Cocks are basically at the bottom of the SEC in sacks and tackles for loss. This is a run defense giving up 192 ypg, and an overall defense that isn’t great getting off the field on third down. The Cocks are good at takeaways, and are tied for the SEC lead in interceptions at 11. That won’t scare Josh Heupel from airing it out, but I expect Heupel will want to get the momentum started on the ground. The Vols will want to force South Carolina to bring that second safety down in run support, and that is where the opportunities open up downfield. Tennessee has completed 35 passing plays of 30 or more yards, the next closest SEC team is Arkansas at 20. Heupel is going to air it out Saturday night. The Vols will use the run game to open up this South Carolina defense first though.

Fun Fact: I was not going to highlight Darius Rucker as a notable alumni of USC. Rucker is arguably the biggest cheeseball in country music, which says a lot. Darius had a fun time dissing Tennessee as he played his hit cover of a cover song while celebrating a women’s basketball national championship. Sadly everything about that sentence is true. The chorus to Wagon Wheel was written nearly 50 years ago by Bob Dylan before Old Crow Medicine Show finished out the lyrics and made the song famous in the early 2000’s. It was around the same time Rucker was filming Burger King commercials. Nothing about that guy says sellout, gee whiz. Hopefully Shane Beamer already has him booked for the Duke’s Mayo Bowl halftime show.

So What Happens? On paper, this is a really nice match up for Tennessee. South Carolina’s offense is reeling after failing to score a single point in Gainesville last weekend. The Gamecocks do a poor job handling pressure, and all Tim Banks wants to do is bring pressure. The Cocks lead the SEC in turnovers, and Tennessee’s defense leads the SEC in takeaways. Defensively, South Carolina really struggled with Florida’s tempo last week. Tennessee will try to go even faster. While the Gamecock defense has done a good job forcing turnovers this year, the Vols turn it over less than any team in the SEC. On paper, the three touchdown spread makes a lot of sense. Goofy things can happen in late November though, and South Carolina is led by General Goofball. Shane Beamer has inherited his father’s knack for big special teams plays, and an early one of those could totally change the mood inside Williams-Bryce Stadium. Tennessee has to keep this from being a goofy game. Pre-snap penalties were horrific last time the Vols went on the road. That stops the tempo of this offense, and keeps it out of rhythm. There are several little things that could easily veer this game into an uncomfortable four quarter affair. I don’t think that happens though. This Tennessee team appears pretty focused, and won’t forget their last road trip. The Vols will have a little playoff juice, some Heisman trophy juice, and even some Orange helmet juice. The Vols play their game, and win the turnover battle. Vols 49, Gamecocks 20