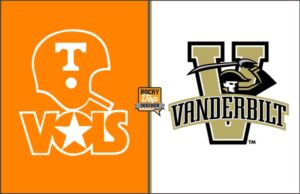 The Opponent: Vanderbilt University was founded in 1873 and named after Cornelius Vanderbilt. Neil (I think we can call him that) lived a pretty amazing life, dominating land & sea shipping lanes in the second half of the 19th century. It was his second wife, also his cousin, who convinced him to donate $1 million to start Vanderbilt University. At the time, it was the largest known charitable gift in U.S. History. Notable alumni included inventor of the internet, Al Gore, as well as famed author James Patterson.

Are they any Good? Two weeks ago the answer to this question was a quick and comical “NO!”. It is a reminder of how quickly fortunes can change in college football though. To be clear, this is not a Vanderbilt team anywhere near the level that James Franklin had them about a decade ago. All of a sudden the Dores aren’t a laughing stock anymore. Back-to-back wins over Kentucky and Florida absolutely force Tennessee to take Vanderbilt very seriously this weekend. While the college football playoffs are out the window, the Vols are still projected to make a New Year’s Six Bowl with a win Saturday night.
What does Vegas Say? Vegas doesn’t see this game as a gimme anymore either. The line opened up on Sunday at either -17 or -16.5. Early action has brought it down to as low as -13.5. That is probably some bettors questioning the resolve of a Tennessee team playing without Hendon Hooker after last weekend’s debacle. It is also some credit to Vanderbilt, winning outright in two straight games as underdogs. Over/Under is set at 64.5. This game will feature the 129th and 130th ranked passing defenses in America.
Matchup to Watch on Offense: Joe Milton’s control of the offense. I am genuinely excited to see Joe Milton play meaningful snaps Saturday night. Don’t confuse that excitement with pure optimism though. Yes, Milton has looked outstanding in mop up duty this season. Not to be a buzz kill, but do we remember the last time we saw Milton play a meaningful snap? He stepped out of bounds with no time on the clock versus Ole Miss instead of throwing into the endzone. Those are two extreme ends of the spectrum, and the reality is we probably see a Joe Milton that is somewhere in between Saturday night. Milton still has ridiculous arm talent. He will be playing against one of the worst pass defenses in the country, and with several talented receivers at his disposal. There is no good excuse for Milton not being at least effective throwing the ball. How much has his mental game, and command of the offense, grown in the 20+ games he’s been able to watch Hendon Hooker command this offense? Coaches and teammates have praised Milton’s attitude as a backup, and there seems to be genuine confidence in #7 leading this offense.
Play calling for Milton will be fascinating to watch Saturday night. This is the SEC’s best passing attack against the conference’s 13th ranked pass defense. The Dores have not featured much of a pass rush either this year, again ranked 13th in the SEC in sacks. Hendon Hooker and a full strength Tennessee offense probably try to throw the ball 40+ times in this game. What about with Milton though? I still expect #7 to air it out plenty, but Tennessee would be wise to get their ground game going first. Vandy hasn’t been great against the run. Most teams have elected to throw it on them, but the Dores give up 4.95 ypc in SEC play. Tennessee needs to establish the run to help out Milton Saturday night. How much does Alex Golesh let Milton run the ball himself? He is a very effective runner, but Tennessee’s only other healthy quarterbacks are Gaston Moore and Navy Shuler.
Matchup to Watch on Defense: Control the pocket. That is a two task mandate; get pressure on the quarterback and don’t let him escape the pocket. We’ve seen a solid pass rush make this defense look fearsome against LSU and Kentucky. Tennessee recorded 9 of their 14 sacks in conference play against those two opponents. We’ve seen the lack thereof make Spencer Rattler and Anthony Richardson look like All Americans. South Carolina played a lot of max protect and Tennessee continued to poorly disguise blitzes up the middle. Tennessee blitzed on approximately 43% of its defensive snaps Saturday night. The Vols recorded just one sack and only two QB hurries against the Gamecocks. Tennessee was not very creative with their pressure in either disguising where it was coming from, or mixing up pre-snap looks. At this point we know this Tennessee defense is solid against a traditional run game, and we know they can’t defend the pass without pressuring the quarterback. The Vols are who they are in late November. There have been moments when Tennessee’s corners have played good, but we seem to be reverting to early season form at that position. It is a group of players so concerned with giving up the big play, that they easily allow the routine play.
Vanderbilt does not have a particularly fearsome aerial attack. The Dores join only Auburn as SEC offenses averaging less than 200 ypg passing. Vanderbilt scored 31 points last week against Florida with only 108 yards passing. Still, this is a Tennessee defense that just allowed South Carolina’s moribond offense to score nine touchdowns on ten offensive possessions. If Tennessee’s defense does not come to play, anything is possible. Mike Wright the runner really concerns me. Wright really hurt Kentucky with his legs. He has been a very effective runner his entire career. That is why Tennessee’s goal needs to be control of that entire pocket. Tennessee has to both pressure and contain Mike Wright. Tennessee is absolutely capable of clamping down on this Vandy offense if they can do so. The alternative could force the Vols into a shootout for their season finale.

(Not so) Fun Fact: Déjà Vu literally translates to “already seen”. When paired with Tennessee football of the 21st century, it is usually a phrase that evokes negative connotations. It is like you have seen this movie before, and you know it is a horror film. In 2016 Tennessee traveled to Columbia controlling its own destiny to win the SEC East. The Vols feel flat despite an uber-talented roster. They left South Carolina with serious questions about the locker room after Jalen Hurd seemingly quit the team midgame. The Vols lost the East that night, but still had a potential Sugar Bowl berth to play for in its season finale in Nashville. Tennessee only had to beat a 5-6 Vanderbilt team led by Kyle Shurmur. Josh Dobbs and Alvin Kamara played well enough, but a soft Tennessee secondary allowed Shurmur to throw for 400+ yards to secure the Vanderbilt upset. Let’s hope déjà vu doesn’t strike again Saturday night.

So what Happens? This game has a dramatically different feel than two weeks ago. Tennessee fans imagined this game as a coronation of sorts, a celebration sendoff for an 11-1 team on their way to the college football playoffs. It would all be at the expense of poor lil Vandy, winless in the SEC since 2019. The Volunteers all of the sudden find themselves shell-shocked after a humiliating loss in Columbia, and as beat up as they have been all season. Vanderbilt is riding a two game SEC win streak, and all the sudden playing for an improbable bowl birth in Clark Lea’s second season. It has happened too often this past decade, but Tennessee’s trip to Nashville feels like another soul-searching expedition. It is a litmus test of Josh Heupel’s locker room, and the culture around this program. That feels like a bit of hyperbole for a team that still sits at 9-2, but a loss Saturday night would feel equally devastating as Tennessee’s last few losses at Vanderbilt.

This game comes down to two questions. Does Tennessee’s defense show up ready to play Saturday night? How much has Joe Milton developed since he last started a game for Tennessee? Vanderbilt has no doubt studied what this Tennessee defense struggles against. The Vols will have to defend the middle of the field better, a place where Spencer Rattler was near perfect throwing the ball last weekend. They will have to tackle better against short yardage passes in the flats. Most importantly, Tennessee’s corners have to play with more confidence, and less cushion, against these Vandy receivers. A lot will come down to confidence and effort for Tennessee’s defense. I expect the Vols to play with more of both on Saturday night, and at least get a few stops. Offensively, Joe Milton needs to be quick and decisive with the football. The Vols can not get behind the sticks with sacks or penalties. I expect Tennessee to stay in rhythm with a steady run game that finds bigger opportunities as the game goes along. Look for a few long runs sprinkled in for the Vols. Alex Golesh should ease Milton into this game, and don’t be surprised to see both Volunteer tight ends more involved in the game early on. It won’t be as pretty as some will like, but Milton will find his spots against a porous Vandy pass defense. Tennessee has some fun, and even pulls out a little trickery in the season finale. The Vols play cleaner and more confident football, and pull away from Vandy early in the fourth quarter. Tennessee 38, Vanderbilt 24