Tennessee overcame its first halftime deficit in SEC play with a massive run to open the second half. The Vols used the run to take control of the game and coast to a, 77-68, victory over their instate rival.

Tennessee assistant coach Rod Clark said Monday that Vanderbilt gets more good shots against them than anyone else in the SEC.

Clark looked like a prophet at halftime Tuesday as Vanderbilt torched the Vols for 39 first half points— the most Tennessee’s given up in a first half this season.

Tennessee’s elite defense has particularly thrived taking other opponents best scorer out of the game. That was not the case against Vanderbilt as Commodores’ star Liam Robbins nearly matched his season average (12.9) with 11 first half points in just seven minutes while battling foul trouble.

“We broke down a couple times in the first half, with our scouting report, where we left over help,” Tennessee head coach Rick Barnes said. “Left some guys that we shouldn’t leave. You look at Liam Robbins, he did a lot of things. He got the ball where he wanted it, for the most part, and finished it.”

Vanderbilt shot just 42% from the field in the first half but made five triples and turned it over just three times on its way to having a big offensive half.

Jordan Wright going coast-to-coast uncontested to make a go-ahead layup to end the first half was the cherry on the top of a rare poor defensive half for the Vols.

“The last play in the first half was one of the worst plays since I’ve been here,” Barnes said. “Let somebody, with that time on the clock, drove the ball the length of the floor and nobody stopped the ball. That can’t happen. That was a really bad play.”

Rick Barnes’ displeasure with his team’s first half defensive effort was clear with the way Tennessee came out to open the second half. The Vols held Vanderbilt to just one field goal in the first 8:27 of the half while Tennessee used a 14-2 run to open up a double digit lead.

Tyreke Key helped spark the run, opening the second half scoring with a put back layup and later hitting a three-pointer which made it a 9-0 run to open the half.

Julian Phillips also proved critical in the run, scoring four consecutive points while Zakai Zeigler checked in for the back half and drilled a triple.

However, the story was Tennessee’s defense which completely flipped its performance from the first half. Vanderbilt didn’t score until over four minutes into the half and Tennessee made every offensive possession difficult for the Commodores.

“I think the second half we came out a lot more locked in,” Phillips said postgame. “We were more aggressive with our assignments, paying attention to the scouting report, knowing what guys to help off of and who not to, so just making those adjustments really helped.”

The result was Tennessee quickly taking control of a game that was slipping away from them at the end of the opening half.

Another Balanced Scoring Night For Tennessee

Tennessee has been extremely balanced offensively this season and that continued, and perhaps was the most balanced its been all season against Vanderbilt.

Eight different Tennessee players scored and all of them scored between six and 15 points.

“I thought he moved better without the ball,” Barnes said. “I thought he was making more than one cut, stopping and playing.”

Tennessee continued to get offensive production from its frontcourt but instead of Olivier Nkamhoua it was Jonas Aidoo and Uros Plavsic. Aidoo was phenomenal in the first half, scoring eight points.

Plavsic ended the night with 11 points but his real production came on the offensive glass where he totaled four rebounds.

The consistent theme from the balanced offensive performance was point guard Zakai Zeigler. Zeigler was fantastic facilitating the basketball and ended the game with nine assists and just three turnovers. The sophomore guard has 27 assists in Tennessee’s last three games.

“I mean, he’s a year and a half into his college career,” Barnes said. “He’s learning because he’s never been what I think he would tell you is a natural point guard. He’s always been a scorer. It’s what he has been asked to do. So he’s learning to play. It’s exciting to think how much better he can get.” 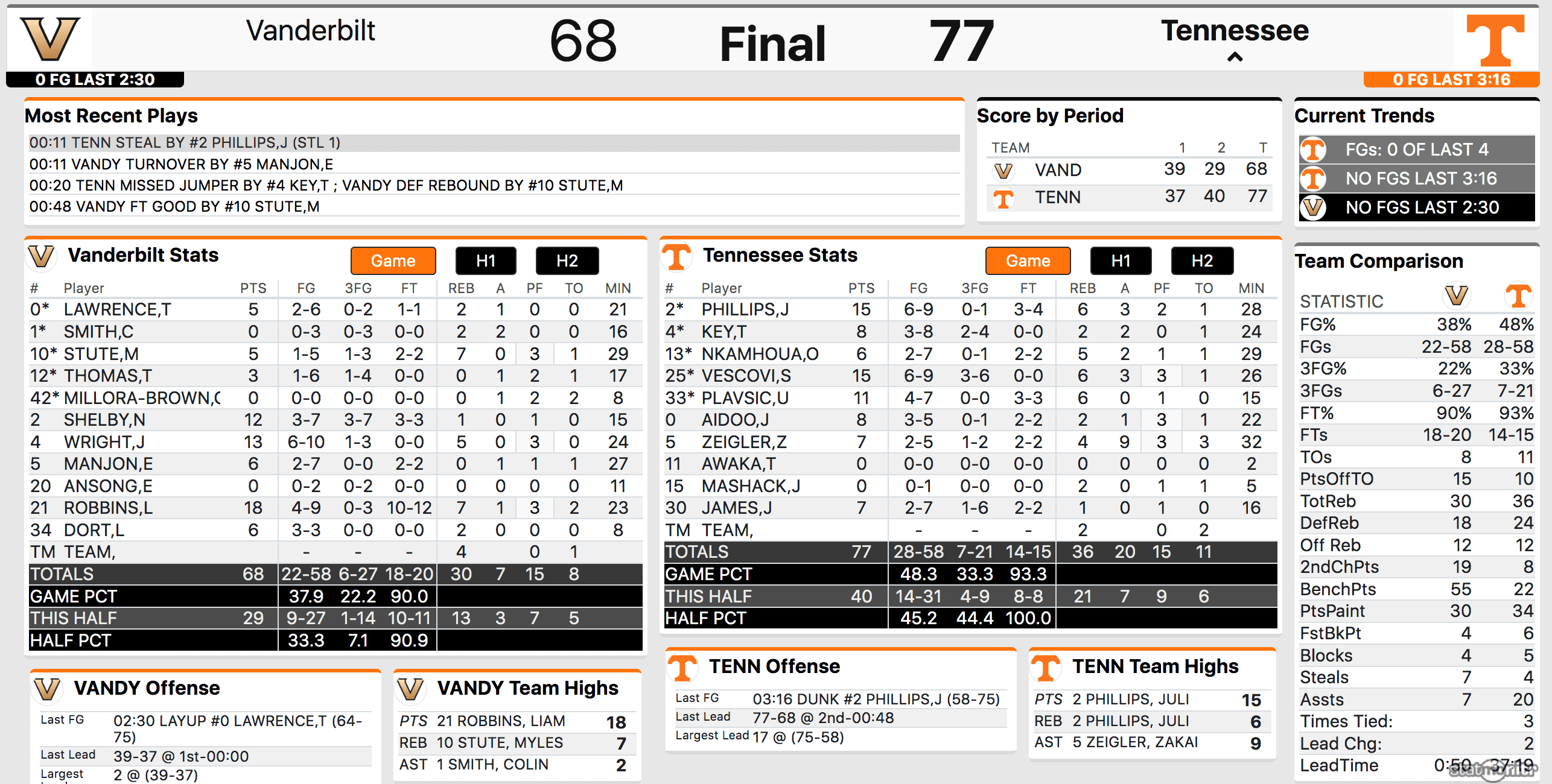