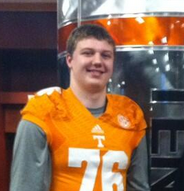 Status
Tennessee offered Mathews shortly after his sophomore season and he’s since visited Knoxville a couple of times. The Vols already have his high school teammate, Ryan Johnson, on board for 2016 and they would certainly like having both Brentwood Academy tackles in this class. Alabama, Ole Miss and Vanderbilt are the other teams to watch right now. Texas A&M, the alma mater of Mathews’ dad, former NFL offensive lineman Jason Mathews, could be a major contender as well if the Aggies offer.

There’s a ton to like about Mathews as an offensive tackle prospect. He’s got a long frame with long arms, is a natural pass blocker and has great training from his father, who not only played in the NFL, but also now coaches him in high school. He shows some strength in run blocking, but will need to improve in that area as his frame fills out more. With Johnson already in the fold, adding Mathews would be a great start to O-line recruiting in 2016.