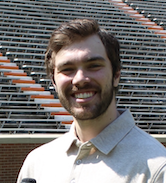 Ric Butler is a Knoxville based sports media personality who has covered University of Tennessee athletics since 2017. Most recently, he served as the lead writer for the website of a local radio station. Ric also helped create and host a daily radio show called “The Blitz.”

Ric’s passion for sports, commanding vocal, and infectious personality have made him popular with both his peers in media and Vol Nation. Originally from Dallas, Ric didn’t grow up riding horses to school. But he did dream of the big city lights. When not chasing down the latest Tennessee story, Ric can be found watching the WWE, often attempting their moves in an embarrassing fashion.