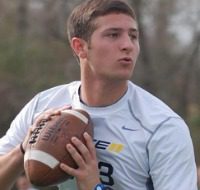 Status
Kendall has long had the Vols on his radar, visiting multiple times in 2013 and returning for a visit to Orange Carpet Day in the summer of 2014. He has a respectable offer list, though some heavier powers such as Georgia, Auburn and South Carolina are still evaluating him. Kendall committed to Tennessee on August 3rd after his second visit in as many weeks to Rocky Top.

Kendall doesn’t wow you with exceptional size or a massive cannon for an arm, but there’s a ton to like about him as a prospect. He moves well in the pocket, has great accuracy and touch on his ball and is a leader and winner on the field. He has some Aaron Murray and Connor Shaw in him – the type of player that NFL scouts might not drool over, but that has the tools to be a really good player at the college level. The Vols are in good shape at QB in the 2016 class with Kendall committed.