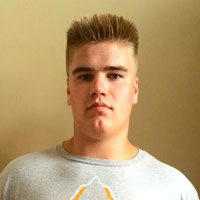 Status
Tennessee had been the favorite for Ryan Johnson since offering him in February of 0214, but plenty of interest from the likes of Alabama, Ole Miss, Florida State and others came pouring in. In the end, Johnson felt comfortable enough to stick with the team he grew up cheering for – he committed to Tennessee on July 19th of 2014. He told RTI he’s all Vol on the morning of his commitment. “I don’t want to look at any other schools – I made my decision,” he said. “This is where I want to go, this is where I want to be. I will definitely help Tennessee recruit players. I want to win championships. I will do everything I possibly can to help Tennessee win championships.” He officially signed the morning of National Signing Day.

Rebuilding depth at offensive line – especially offensive tackle – is a big priority for the 2016 recruiting classes. Johnson gives the Vols a true offensive tackle frame that they can develop and hope to get ready to compete for a starting job by his third season on campus or so.

That’s the pattern Jones would like to see develop as he fortifies the offensive line depth: get quality players on campus, let them redshirt or at least develop for a year or two before throwing them on the field regularly.