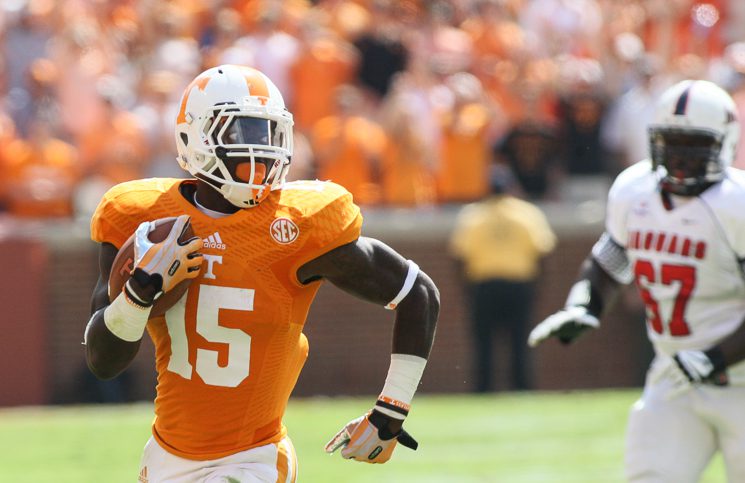 The running back position has a classic battle feel to it going into fall camp. Marlin Lane, the steady-though-not-always-spectacular veteran, will be battling with talented newcomers Jalen Hurd, Derrell Scott and Treyvon Paulk to replace Rajion Neal, the primary workhorse from 2013. 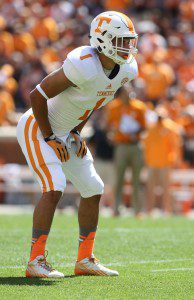 Lane is somewhat of a known commodity, though he’s also taking tangible steps to become a true No. 1 back after being more of a 1B-type over the past couple of years.

He had his best spring as a Vol, looking to be in the best shape of his career and sticking around campus to get as much work as possible. His attitude and work ethic, from all accounts, are at a new high. But though he’s the odds-on favorite to see the most touches this year, there’s a noticeable buzz around the newcomers, especially Hurd, who enrolled early and took part in spring practice. There are no guarantees of how the jumbo freshman will play at the SEC level, but he certainly showed he can be a capable SEC back from Day 1. He heads into camp as the best bet to split the carries with Lane.

Scott and Paulk, both speedy summer arrivals, will get their say in camp, however. And don’t forget about Devrin Young. The local product quietly had one of the best springs on the team. Nobody is pretending he’s an every-down back, but he certainly will get touches in a variety of ways in the backfield.

Butch Jones on the running backs after the Orange and White Game: “Jalen is going to be a special player for us. Marlin Lane was a model of consistency. I thought Marlin Lane improved his overall burst and acceleration through the hole and I thought we did a much better job in our pass protection game as well.”

Lane likely trots out for the first play against Utah State and, if he stays healthy, leads the team in rushing and could push to hit 1,000 yards. But in what will be at least a two-back system, and, perhaps even a running back-by-committee approach, Hurd could play early and often with Young getting a few touches per game and one of the other newcomers – Scott or Paulk – finding a niche as well. Pickett, who was at one point Maryland’s primary back in 2012 before sitting out as a transfer in ’13, is a nice insurance policy.

There would be some value in redshirting one of the freshmen to spread out that trio of newcomers. Paulk, who is coming off a significant knee injury in high school, would be the most likely candidate at this point.