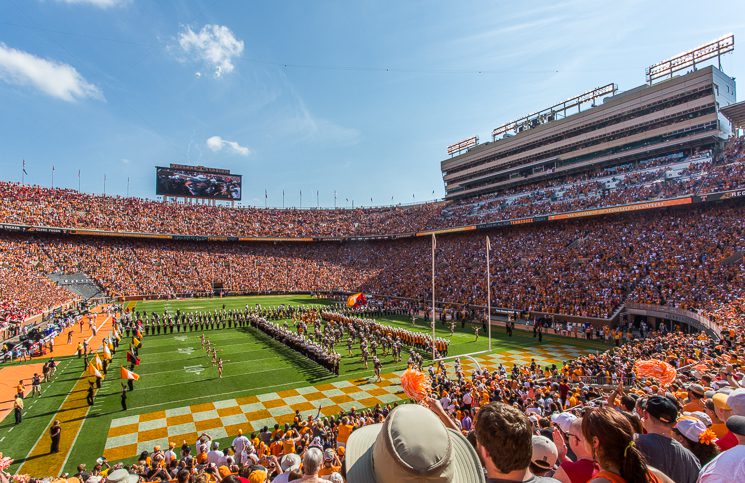 The Vols enter the 2014 season with a daunting slate of games before them—they’ll face five teams that finished last season ranked in the final AP Poll (four of them ranked in the top-7) and their first four opponents all went bowling last year. The NCAA ranks Tennessee’s 2014 schedule as the third-toughest in the nation. There’s simply no question the Vols will play one of the most difficult schedules in the country this year, but which game will prove to be the hardest test?

Below, you’ll find Tennessee’s games ranked from easiest to most difficult. Factors include Dave Bartoo‘s talent rankings (taken from his SEC-Preview Magazine—he averages the last four recruiting classes of each team and adjusts for attrition) plus game location, history and where each contest falls within the schedule.

Tennessee’s lone FCS foe, the Mocs are coming off their fourth winning season in five years. The Vols own a 37-2-2 mark in the series with UTC but haven’t played them since 1969. In 1958, Tennessee suffered one of the worst losses in program history when UTC left Knoxville with a 14-6 victory. To make matters worse, UTC fans tore down Tennessee’s goalposts. A riot ensued. Police were called and tear gas was fired.

Since the NCAA split Division I football into two levels in 1978, the Vols haven’t lost to an FCS team. The Mocs are certainly a solid FCS program, but they won’t be able to hang with Tennessee for more than a quarter. No goalposts will be coming down this year when UTC visits Knoxville.

Many have pointed to this game as a potential stumbling block for the Vols, but that talk is overblown. Their starting quarterback, Chuckie Keeton, is an NFL-level talent but is coming off an ACL-injury. He should be 100% by kickoff but will be shaking off some rust after missing the last eight games of the 2013 season and all of spring practice. Outside of Keeton, the Aggies don’t have the horses to compete with Tennessee. They’re one of the least talented teams in the country and lost the bulk of their starters from last season’s 9-5 team.

The Red Wolves are no slouch and their ranking as the third easiest game on Tennessee’s schedule is indicative of just how difficult UT’s path to bowl eligibility will be. Arkansas State notched 28 victories the past three seasons and returns eight all-conference starters from last year’s 8-5 squad. Dave Bartoo ranks Arkansas State as the 88th most talented team in the country. Their superior talent and experience makes this a tougher game than Utah State…but a game the Vols should win handily.

The first SEC team on the list, Kentucky is headed in the right direction under Mark Stoops. They return 16 starters (the most in 14 years) and, thanks to Stoops’ work on the recruiting trail, UK’s talent level will take a jump this fall.  That said, it’s still Kentucky. The Wildcats haven’t bested Tennessee in Knoxville since 1984 and haven’t won an SEC game since 2011. The Vols won’t lose this one.

A formidable foe under departed head coach James Franklin, the Commodores are set to fall back to earth this year. They’re the least talented SEC team Tennessee plays according to Dave’s rankings and must replace nearly half of their defensive production and the majority of their offensive production this season. This is the first road game on the list…but does it truly count as a road game if you have more fans in attendance than the home team? Either way, the Vols have a good chance to end their losing streak to Vandy this fall.

Don’t buy into the Missouri hype. They captured lightning in a bottle last year and are primed for a big nose dive this season. The Vols outclass them in the talent department (Dave has the Tigers at 39th and the Vols at 14th) and return more overall production. Tennessee has the talent, experience and home-field advantage in this one; a game they likely have to win to go bowling.

The Gators are talented but horribly coached. Muschamp somehow survived a home loss to FCS opponent Georgia Southern last year—a team Florida paid $550,000 to beat them—and enters the season on the hottest of seats. The Gators have the talent to win the national championship (Bartoo ranks them as the 5th most talented team in the nation), but they aren’t likely to turn things around in Muschamp’s fourth year at the helm. That said, they have the talent and experience edge in this one while the Vols have the coaching and location advantage. If the Vols were to knock off the Gators this year that’d likely be the final straw for Muschamp’s tenure in Gainesville.

Tennessee’s first trip to Oxford since Lane Kiffin roamed the sidelines is bound to be a tough test. The Rebels took another step forward last year under Hugh Freeze by posting an 8-5 record which included wins over LSU and Texas, but they faltered down the stretch with a loss to Mississippi State. If this game wasn’t in Oxford, it’d be lower on the list. Tennessee has a slight talent edge (8 spots according to Bartoo), but the home field and experience advantage goes to the Rebels.

The Gamecocks will be looking to avenge Tennessee’s 23-21 victory in Knoxville last year; a game which cost South Carolina a trip to the SEC Championship Game. Spurrier’s squad returns a veteran offensive line, senior QB Dylan Thompson, workhorse running back Mike Davis and the majority of their defensive starters. The Vols always play South Carolina extremely tough and Tennessee will have a negligible talent edge—but knocking off the favorite to win the SEC East crown on the road won’t be an easy proposition for a team as young as Tennessee.

Richt’s squad is once again supremely talented (ranking 6th nationally). They bring back nearly 90% of their defensive production and add defensive coordinator Jeremy Pruitt, fresh off a national championship at Florida State, to their staff. Is this the year the Bulldogs get over the hump and win an SEC championship? That’ll depend largely on how well they’re able to replace departed QB Aaron Murray. This series has proven to be unpredictable over the years, but a victory in Athens will be a tall task for Tennessee this season as Georgia has the talent, experience and home field advantage.

The Saban train hit a rough spot at the end of last year but is poised to rebound this season. Alabama has signed the No. 1 class in the country four consecutive years and will undoubtably be the most talented team in the nation. They return over 70% of their production on both sides of the ball and will enter Knoxville as heavy favorites. The Vols took top-10 Georgia to overtime and knocked off South Carolina, who ranked 4th in the final AP Poll, in the friendly confines of Neyland Stadium last season, and, in just one season under Butch Jones, the Vols demonstrated that they can play with anyone at home. But this is Alabama. In the hierarchy of the SEC, there’s the Crimson Tide and there’s everyone else. The Vols will have to put forth their best game in ages to win this one.

Stoops’ team is coming off an 11-2 campaign which saw them obliterate Alabama in the Sugar Bowl. They’ll be the prohibitive favorite in the Big 12 and could contend for a national championship if quarterback Trevor Knight can replicate the success which saw him rack up nearly 350 yards passing against Alabama. The talent gap between the Sooners and the Vols, however, isn’t as wide as you might think: Bartoo has them as the 11th most talented team in the country, just three spots ahead of Tennessee.

So why is this a tougher game for the Vols than when the Crimson Tide come to Knoxville? Two reasons: the Kiffin effect and Tennessee’s road struggles. Kiffin worked wonders with former Vol QB Jonathan Crompton during his lone season in Knoxville, but his track record running an offense has been shaky elsewhere. He’s the biggest question mark for Alabama this season.

Agree or disagree with these rankings? Register for our site and leave a comment below.