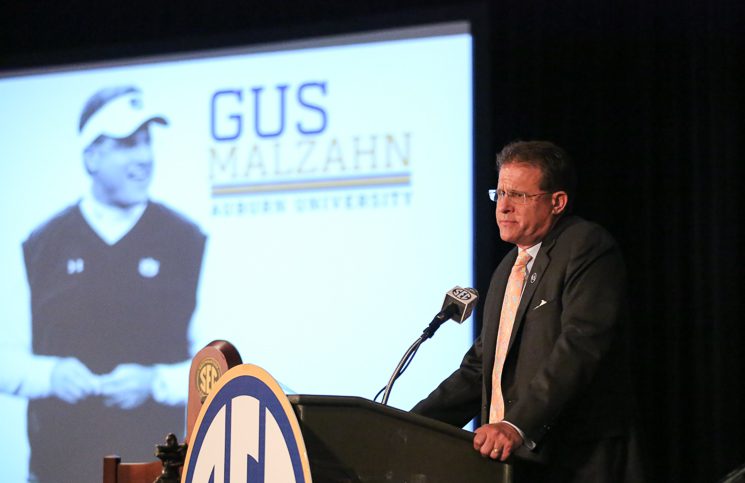 HOOVER, Ala. -Auburn quarterback Nick Marshall was cited for possession of a small amount of marijuana last Friday in Georgia. This citation ultimately led to his removal from Auburn’s SEC Media Day lineup by choice of his head coach Gus Malzahn. Consequently, this move left the entire week essentially void of star power only a year after Johnny Manziel and Jadeveon Clowney made a circus out of the event. It had been a fairly quiet summer for rule-breaking in the SEC before Marshall’s citation, naturally, Auburn’s troubles were sure to be a hot topic on day one.

Malzahn gave a very typical statement to open up the Tigers’ session at Media Days. He praised his team’s accomplishments in 2014 while painting a vivid picture of continued improvement for his 2015 squad – it was truly mesmerizing, his southern drawl echoing through the ball room at the Hyatt Regency hotel. When it came to his quarterback, however, the Auburn coach was tight-lipped.

“It is a privilege to represent Auburn at SEC Media Days,” Malzahn said. “Last week, Nick Marshall lost that privilege. He made a mistake and he will have to suffer the consequences. I’m not ready at this time to say what those consequences will be.”

One reporter asked Malzahn if Nick Marshall was in any danger of missing the season opener against Arkansas.

“I’m not there yet,” the coach uttered.

When pressed by the same reporter as to when he expected to have a decision made about Nick Marshall’s eventual punishment, a now frustrated Malzahn offered even less.

It was clear that the head-man was none too pleased with his senior quarterback’s recent lapse in judgement. Malzahn again refused to offer any hints of his plans for Marshall’s punishment but did express that he has high expectations (No, really. He said that.) for his quarterback.

“I’m hoping he learns a lesson. We have high expectations for our all of our players, and specifically our quarterbacks.”

After various questions on Auburn’s center, running backs, recruiting, coaching staff…etc. one reporter circled back to Marshall’s citation. He offered Malzahn a multi-layered, in depth, well-thought-out question on the coach’s personal feelings towards not only marijuana’s medicinal and recreational uses among athletes and non-athletes, but also the coaches personal experiences in dealing with any players who have used it in the past.

“We have school rules and I have team rules…we abide by them.”