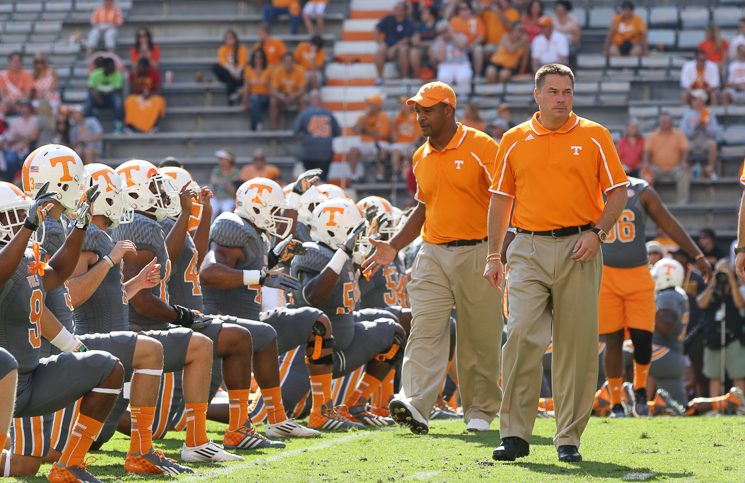 HOOVER, Ala. – Butch Jones has to be entering the 2014 edition of SEC Media Days with much more confidence than he did a year ago. Not necessarily the confidence that this year’s team is suddenly going to be ready to win 10 games or compete for the SEC Eastern Division crown, but the confidence that comes from steering a ship that is finally headed in the right direction.

At this time last year the program was faced with many more questions than answers, and most of those questions were aimed towards the head coach.

Is the staff he assembled talented or experienced enough to compete in the SEC? Can he motivate his players to play hard for four quarters? Will he be able to consistently recruit at a high level?

I’ll tackle these in order.

Admittedly, I too had questions about Butch Jones’ staff when he initially hired them. I worried that he leaned too heavily on hiring his ‘buddies’ rather than truly great and experienced coaches with proven track records of competing in this league. I thought back to the turnover that Derek Dooley’s staff endured and how the team lacked any continuity under his leadership. I was worried that Butch Jones’ staff was destined to live out a similar scenario in the cutthroat environment of the SEC.

The beginning and end of the 2013 season were bookends of frustration, no doubt. But when I go back and think about that two game stretch of Georgia and South Carolina – after the team began to turn the corner but before injuries to Justin Worley and Marquez North erased all hope of a bowl game – I saw a team that was on par, if not better than both teams they faced based on scheme alone. The Vols were vastly outmanned in both contests from a talent standpoint, yet they beat 11th-ranked South Carolina and were merely an inch away from upsetting 6th-ranked Georgia – a clear testament to the staff’s ability to coach winning football against better teams.

Volunteer teams under Derek Dooley were notorious for epic collapses in the third quarter. Not only were his teams out played after halftime, they generally got out worked, out hustled and out classed. To put it bluntly, his teams looked like they quit the second things started to head south. They lacked motivation. Butch had to get his team believing they could win, and understanding that it took four quarters of effort to make it happen. I don’t think anyone who watched those games against Georgia or South Carolina could fault the Vols’ effort. The effort was there, even if the wins didn’t always accompany it. Even in games where the outcome had long since been decided, his players continued to play hard until the final whistle.

The biggest problem Jones faced in 2013 was the lack of talented depth on the roster thanks to attrition and gross mismanagement by the previous staff. These problems are only fixed on the recruiting trail where signing elite classes year after year is the cornerstone of success in the SEC. This issue has not gone unaddressed by the second-year coach. After his first class (put together in only a few weeks upon being hired) finished ranked in the 20s, Jones and his staff went to work to seek out the nation’s best and get them to Rocky Top.

Tennessee finished last year with a consensus top-7 ranked recruiting class. Jones addressed needs on both sides of the ball while bringing in 14 early enrollees who look poised to make huge contributions in the 2014 season. He currently has the 2015 class ranked anywhere from 5th to 7th nationally in recruiting and looks poised for another top-10 finish.

Time. The staff has shown they can get it done, his players play hard for four quarters and his recruiting is on par with the nation’s best. The only thing to do now is wait. With confidence.