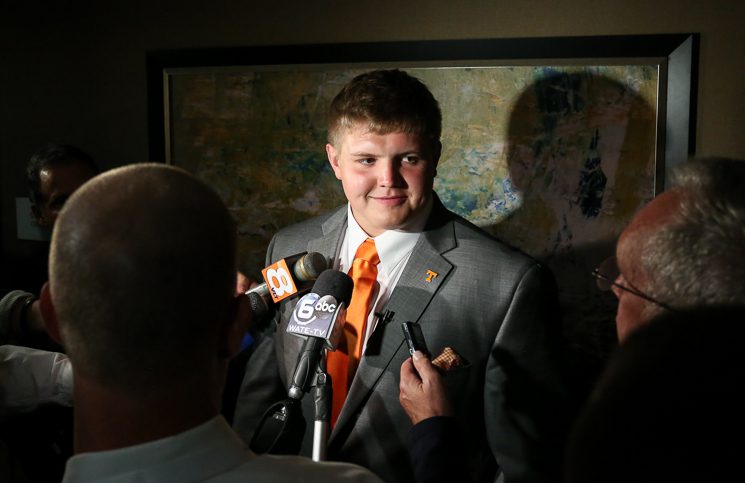 HOOVER, Ala. – Mack Crowder probably wasn’t found on anyone’s list of players predicted to represent Tennessee at the 2014 installment of SEC Media Days. In fact, anyone who predicted that a Vol offensive lineman would be sent to Hoover at all deserves some serious accolades.

Tennessee sent two offensive tackles to this event last year in Tiny Richardson and Ja’Wuan James – both of whom are now in the NFL. The interior of that offensive line is also gone as Alex Bullard, James Stone and Zach Fulton all moved on after graduating. Replacing five starters along the offensive line with young and/or inexperienced players may not be the ideal situation, but the Bristol native isn’t interested in a pity party.

“Having young guys is no excuse,” Crowder said. “We have a job to do and we are going to go out and do it to the best of our abilities.”

He and the rest of his teammates are very aware this year’s offensive line is being labeled by many as the weakest unit for the Vols this season, and he even admitted that they have discussed the notion amongst themselves. He said he and his fellow linemen have been waiting for their opportunity to play in this league as starters, and that he is eager to prove their doubters wrong.

“We do talk about it, but we realize that it’s just opportunities. There are five new starters and it’s going to be opportunities for us to play, for us to come out and prove that we can hang with everybody else. We have a job to do and we’re going to go out and do it.

“Just because we’ve been backups doesn’t mean that we haven’t been playing together for the past three years or so. We’ve all been lined up beside each other and practicing together,” he said. “It’s our time to step up now.”

Part of Crowder’s job this offseason has been helping some of the younger players develop and prepare for the upcoming season. The seemingly tall task has been made much easier for the redshirt junior thanks to the younger players’ willingness to listen and learn from the older linemen.

“(Leading) is not as big of a challenge as you might think because of the guys underneath me. We have a lot of young guys and they all really appreciate any advice that they can get because they all want to get better. So me, Marcus (Jacskson) and Kyler (Kerbyson) have a pretty easy job leading those guys because they want all of the information they can get.

Delivering assistance to younger players with confidence is new to Crowder. Last year at this time he was not in much of a position to teach the offense to anyone. The Vols were implementing their third offensive system in three seasons and the whole team was, yet again, in the position of starting from scratch. This season Don Mahoney returns to coach the offensive line and the system has stayed the same, something Crowder says will aid in the team’s development.

“That actually does help quite a bit that we’ve been in the system now for two years. Before Coach Jones got here I had to learn three new playbooks, so having the same thing in front of me two years in a row is going to help.”

Crowder feels good about the team’s progress to this point, but stresses that it doesn’t matter where they are today.

“We’ll see how far along we are when the first game comes along. Right now all we are focused on is the upcoming season. We’re obviously happy that Coach Jones is here now and we are looking to press forward underneath him.”