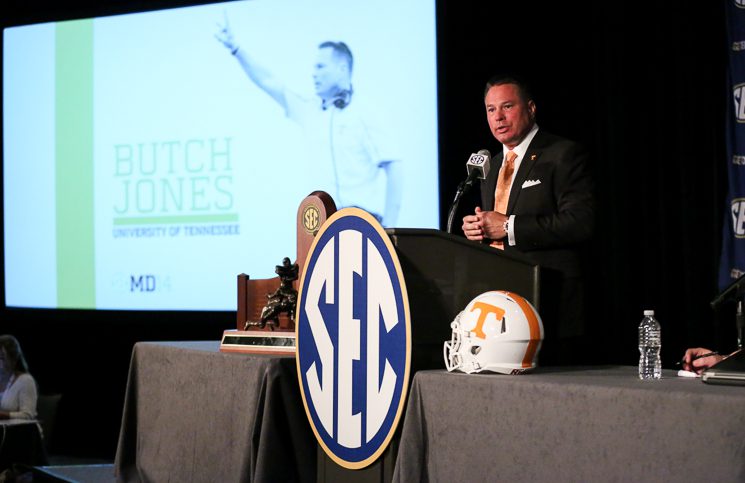 HOOVER, Ala. – In what has become common practice for Butch Jones in recent months, the coach spent much of his time during Tennessee’s SEC Media Day fielding questions about the challenges of getting a young and relatively inexperienced football team ready to compete against the nation’s 2nd toughest schedule.

Most of the questions focused on the development of the 2014 signing class. The Vols signed 32 players –  31 of which have already been cleared to enroll in school and compete in fall camp. The only hold-out from that class is JUCO linebacker Chris Weatherd, who is expected to enroll in August. Tennessee will need help from more than a handful of those newcomers this season, and Jones is pleased with what he’s seen from them so far.

“The great thing about the influx of talent,” Jones offered. “They’re youthful but they’re very, very hungry and very, very driven. We’ve had a great offseason. Our players have done a great job.

“It’s a team of unknowns. A little less than half of our football team will be new this year and they haven’t gone through the rigors of an SEC football season. It’s going to be about how fast we can jump that learning curve.”

Not lost on the second year coach is the fact that he is likely to be relying on freshmen and first-year players in the toughest and, in his words, most “unforgiving” conference in the country. Leaning on older players to help guide the newcomers was part of the plan all along, and while he is currently pleased with their progress, he also knows that the road ahead of them is a long one.

“Our older players have done a great job of mentoring on what it’s like, but can they (the newcomers) stay in our three-technique in game six, have the ‘Power’ run at them three plays in a row and have to work off of the double team?”

“They are 17-22 year old individuals and you raise them like your kids. We are going to have to rely on the older players that we do have to continue to nurture them and to bring them along and hold them to a high standard, which they will.”

With so many young players coming in trying to earn camp reps and future playing time from veterans, some discontent from older players seemed likely. But when asked about team chemistry, Jones said he sees a team and program that are on the right track.

“I like our team chemistry, I think this team is extremely close, they hang out, they study film, they do the extra. I come in off of vacation, it’s 7 o’clock at night and our indoor is filled with them practicing on their own. That shows me a lot of where our program is and the individuals that comprise our football team right now. “

Jones also said that the goals for this season are the same as they were last season, regardless of youth. Tennessee hasn’t been to a bowl game in three years and hasn’t won one since 2008, two stats that he and his team are working to change every day.

“Everything is about a bowl and getting back to that. It’s hard to believe that there isn’t an individual in Tennessee football’s program right now from a player standpoint that has participated in a bowl game. We have to continue to progress, put our head down and get better week in and week out.”

The challenges for this team in 2014 are many, but the focus for this coach and his team will be on the process. And while that process of molding this young team has already begun with summer workouts and film sessions, Jones warned that practice hasn’t started yet.

“We’ll know more as training camp progresses, so stay tuned. We’re not just ‘Add Water.’ We are going to have to continue to get better each and every day.”