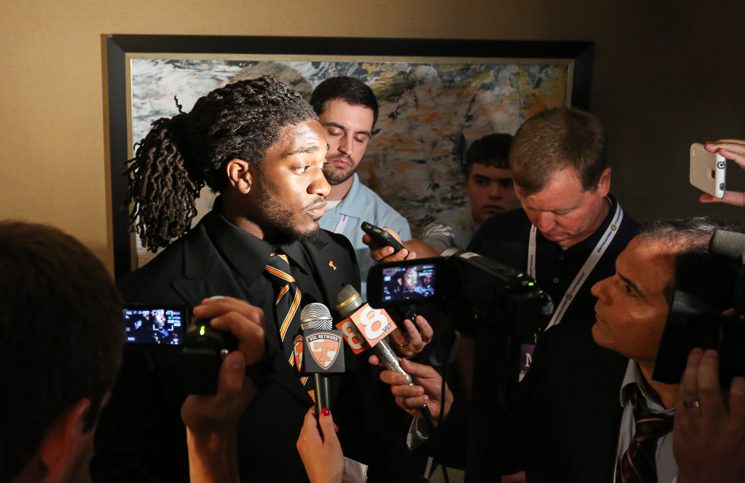 HOOVER, Ala. – Thursday morning, A.J. Johnson was named to the 2014 Preseason All-SEC First Team Defense. But Johnson didn’t return to Tennessee for preseason awards and accolades, he came back to lead the Vols, a team without a player on the roster with bowl experience, to postseason play for the first time in four years and to earn his degree.

“The two things that really sold me on coming back were that when I came to Tennessee, I came here to build the program up and help to come back to a winning program,” Johnson said. “This is my senior year, so I’ll have one more year to do that, and get some wins and leave a winner. The other big decision is I get to graduate in December and leave with a degree. That’s going to help me throughout life.”

While Johnson’s degree will help his post-football career, his skills on the field will land him as the anchor of a Vol linebacker unit that must compensate for youth along the defensive front this season. Without exceptional linebacker play, Tennessee’s defense will struggle yet again. Over the last three seasons, Johnson has tallied an eye-popping 324 tackles and been the centerpiece of the Vol defense.

Butch Jones praised Johnson and his decision to return during his SEC Media Days appearance.

“Well, we’re excited to have A.J. back,” Jones said. “He means so much to our football team, being our middle linebacker. He’s the quarterback of our defense….[coming back is] an opportunity for him to improve his coverage skills, his overall knowledge of the game, and to get bigger and stronger, to be able to play at the next level.”

Johnson has worked hard this offseason to improve his mental discipline and coverage skills – areas in which he improved as the season progressed last year. Even more importantly, he has embraced his role as the leader of the defense.

“My role in that is helping and being a better leader,” Johnson said when asked about his role in developing the young players around him. “Just building myself to be a better leader, being more vocal and having other guys around me that are being vocal and leading as well. Just having a group of guys who lead and help the whole team and the young guys who came in, they’ve been working real hard.”

When he takes the field this fall, he won’t be alone. His best friend Curt Maggitt will be right there with him helping push the Vol newcomers.

“They feed off of each other,” Jones said. “The players feed off of these two because whether it’s in the weight room or on the field, they challenge each other. They have a great chemistry about themselves, and they expect and demand a lot from each other. One individual isn’t maybe holding up to what they expect, they let each other know.

August 31st, when Utah State comes to town, Johnson will be right there quarterbacking the defense. How well he’s able to lead could be the difference between finishing his career without a bowl appearance or jumpstarting Tennessee’s rebuilding process.

“A.J. is somebody who motivates me. Who pushes me. When I’m tired, I look at him and I’m not going to give up,” Maggitt said when asked about Johnson.” He’s somebody I go hard for and we’re going to get it. He came back for a reason and we’re not going to settle.”

If Maggitt’s words are any indication, Johnson is ready for the challenge.