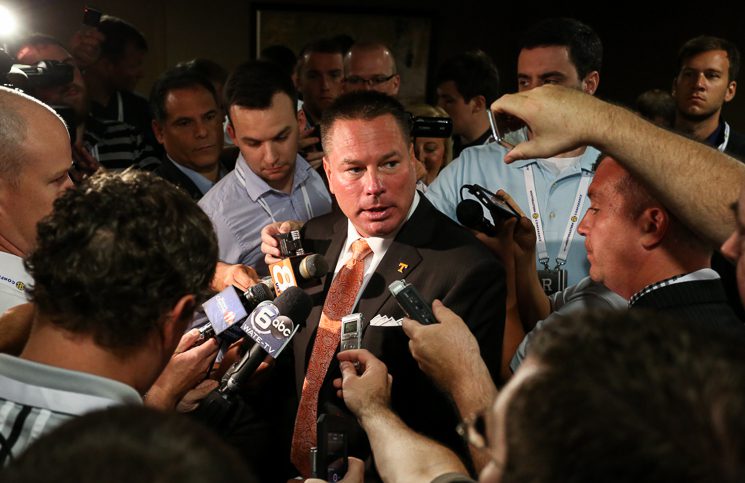 HOOVER, Ala. – Another season is on the horizon and another new mantra from Butch Jones has emerged.

It’s becoming a sign of the dawn of a new football season in Tennessee as much as SEC Media Days or fall camp.

This year he adds “The Power of One” to his list. And while we invariably will get tired of hearing it spewed out by every player, coach and representative of the team over the course of the season, this one makes a lot of sense.

For a team with so much potential for the future – a team that very well could be in the conversation to start contending for bigger prizes as soon as 2015 – the only way for that goal to be realized is to take it one day, one game and one moment at a time.

“The one is very powerful with this football team,” Jones said at his appearance during SEC Media Days on Tuesday. “We have to win one moment at a time, one play at the same time, one practice at the same time, have one unity of purpose, one common commitment and one mindset. It’s all about our players understanding they have to earn the right to win. There’s a difference between earning the right to win and hoping to win. Our players are doing that right now.”

Learning how to earn that right to win is a new concept for every player on the roster. The 32 newcomers, though clearly talented, don’t know how to yet. The veterans on the roster haven’t mastered it yet, either. No player on this team has ever played in a bowl game.

Four straight losing seasons can plant deep seeds of doubt in veteran players. Tennessee will face adversity this season. That’s a given. But Jones is looking for a squad that can push through it, overcome it on some levels and start to push forward as a program.

“The whole key for us is how do we manage the natural adversities that a college football season brings about, the daily demands of being a student-athlete – the media, going on the road and winning in hostile environments, to the time management that’s required, community service – all that embodies being a student-athlete?” Jones said.

The “Power of One” mantra is extremely applicable to the schedule as well. It’s easy to circle Florida, Missouri and Vanderbilt as some of the key swing games that would give UT the best chance to get back to bowl eligibility.

But Tennessee isn’t back there as a program yet. Utah State needs more than lip service. The Aggies truly need to be Tennessee’s singular focus as training camp gets underway.

That’s why Jones barely answered questions about the Gators or Commodores at Media Days. No lack of respect intended – just a focus on the one thing that’s up next.

“[Utah State] has our attention and our respect,” Jones emphasized.