Ole Miss, not Auburn or Missouri, is UT’s Rebuilding Model 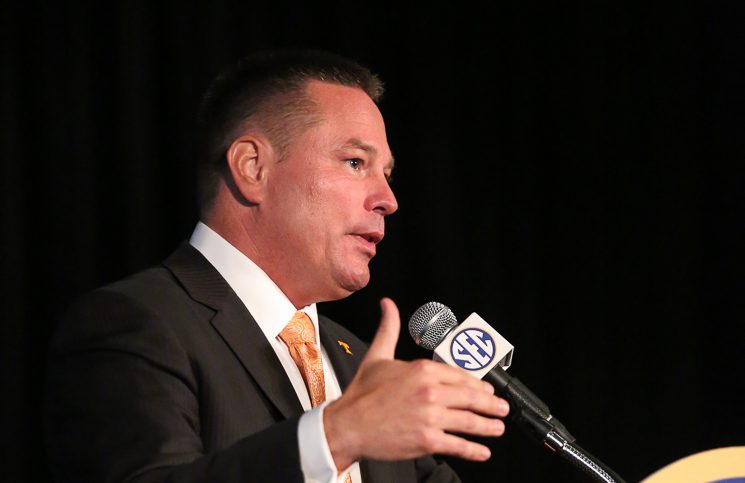 HOOVER, Ala. – It was a natural question for representatives of both Tennessee and any other team coming off a subpar season that showed up for SEC Media Days.

Does the success that Auburn and Missouri had in 2013 after struggling in 2012 give hope for teams looking to turn it around in 2014?

To an extent, the answer is yes. There’s some level of proof that a team can go from close to the cellar to close to the top of the SEC in one season.

“I think anything is possible,” Butch Jones said when asked about those two turnaround programs. “Every program has its different parameters, different nuances, different dynamics in terms of older players, younger players. But I think what Auburn does is it gives you an illustration that anything and everything is possible – just like Missouri.

“You know, you look at Missouri and where they were picked last year at this time. I think it’s a great illustration that in this great game of football and in this conference anything is possible. You just have to put your head down and keep grinding and working every day.”

But like Jones mentioned, every program has different dynamics, and this particular Tennessee squad doesn’t have some of the qualities that Auburn and Missouri had heading into 2013. The Vols aren’t as experienced top to bottom. They don’t have a core of players who had seen success in previous seasons.

As Jones harped on over and over during his brief stay in Birmingham, nearly half of his roster for 2014 will be playing college football for the first time.

So while, yes, anything can happen, the most realistic path UT can take back to competiveness is the route that Ole Miss has been on over the past two years. True, the Vols have more tradition and overall history than do the Rebels right now, but they can learn a thing or two from coach Hugh Freeze, who is entering his third season in Oxford.

Freeze took over an Ole Miss squad in 2012 that had won a total of two conference games in the prior two seasons. Many of the problems he faced were similar to what Jones is dealing with in Knoxville – a lack of overall talent, experience and a culture that needed to be changed.

Freeze got to work with just 68 scholarships in his first year and kept grinding. The results haven’t been spectacular on a national stage. The Rebels went 7-6 (3-5 SEC) in 2012. They added another win to make it to 8-5 (3-5) in 2013. With improved recruiting, an experienced quarterback who learned from lumps earlier in his career, it’s not a stretch to think the Rebels could win eight or nine – possibly more – in 2014. They’ve been given odds as high as 35/1 to win the national title this year. There’s still room for the Rebels to grow, but that’s a huge step from where they were.

That is the path Tennessee will most likely have to travel to make it back in the SEC. Jones has started down the road with his recruiting and the cultural changes he’s made around the program.

Would every Tennessee fan love to see an Auburn/Missouri-like turnaround? Absolutely. But the Ole Miss model is the more realistic path at this point.