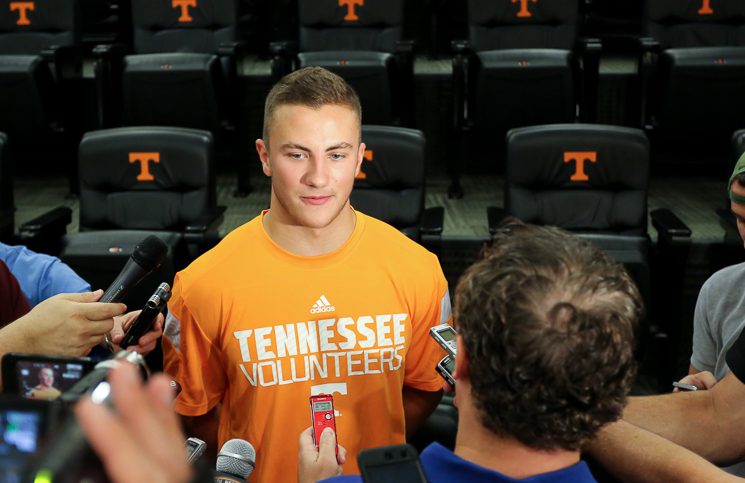 Dillon Bates admits that he has leaned heavily on his father’s advice for much of his life, but especially when it comes to football. Dillon’s father, Bill, was a standout safety at Tennessee from 1979 to 1982 who went on to have a very successful 15-year career in the NFL as a Dallas Cowboy – a natural choice for a son seeking advice on the gridiron.

This bond with his father – and being raised in a football-centered household for 17 years – helped Dillon grow into a consensus top-100 player in the 2014 class as an outside linebacker. Dillon has no doubt that the time spent with his dad helped make him into the player he is today and has left him well prepared for his freshman year at Tennessee.

“Just growing up being around football all the time, I don’t remember a time where I didn’t know football,” Dillon said. “Growing up with football 24/7, talking to my dad, that’s the greatest resource that I could pretty much ask for.

“Talking to him every day has really helped me in understanding the game, understanding different coverages and assignments that I’ll need to know. It’s been a great help having him for advice and for my game maturity.”

One would naturally assume that after having a successful four-year career at Tennessee, Bill Bates would have helped steer his blue-chip-linebacker son to also play at his alma mater.

Dillon says that wasn’t the case, but admits that he knew what selection would make his dad happiest.

“He took me everywhere. We visited Alabama, Florida, Ohio State – all these different places. He did a great job of giving me the chance to look around, explore my options and make my own decision.

“I could always tell where he wanted (me to go) and that he’d be very happy if I came here, and I know he is, but I’m happy to be here too. This is always where I wanted to go.”

Dillon grew up with his family in Florida – not exactly Big Orange Country of late – but says he remembers the day his blood started to develop that orange tint.

“I remember growing up in Florida, we had a hurricane one year and we evacuated and had to come to Tennessee to visit family. We went to a game against UNLV – that was the first time I had ever been in Neyland Stadium.

“Just walking around the stadium and the campus, seeing my dad’s name everywhere, it kind of stuck in my mind that this is something I want to do and this is somewhere that I fell in love with.”

Fast-forward nearly 10 years. That young kid walking wide-eyed around his father’s old stomping grounds enters his first season at Tennessee as a member of one of the most highly regarded recruiting classes in the history of the program. He, along with Evan and Elliott Berry, Neiko Creamer, Vic Wharton and Todd Kelly Jr., are all legacy recruits for a class that finished ranked as a consensus top-7 class in the country last year.

When asked if he and the other members of the class felt any type of pressure to perform quickly, Bates said that his and his teammates’ goal is simply to make everyone better.

“There’s definitely those few (personal) goals, but it’s really more about what I can do to help the team and be the best teammate I can be.”

Regardless of how quickly he or any other member of the 2014 class sees the field, Bates was clear that the goal remains the same. A goal that, he says, will be reached.

“Everybody’s goal is to bring back Tennessee to where it’s supposed to be. It will happen. It’s just a matter of time.”