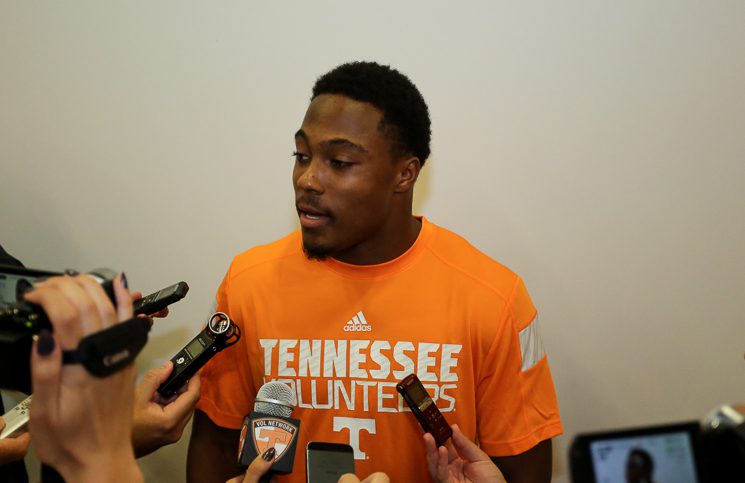 It’s understandable that turnovers would be on the minds of Tennessee freshmen Evan and Elliott Berry.

After all, they watched their older brother, legendary UT defensive back Eric Berry, intercept 14 passes, recover four fumbles and force two more in his three seasons in Knoxville.

So when the competitive younger brothers got to campus, one of their first challenges to each other was to see who could emulate older brother better in that area.

“There’s a lot of trash talking that goes on between us,” said Elliott, who also admitted that Evan is more skilled in trash talking. “Right now we’ve got a little deal going – it’s about who is going to force the most turnovers.”

“We trash talk a lot but we really don’t distinguish who is the best,” added Evan. “We just work hard and hope for the best.”

And while the sibling rivalry will never completely cease, at least any jabs at each other still come with the understanding that they’re ultimately working towards the same objective. They made that official when – despite a sizeable offer list for both of them – the twins from Fairburn, Ga. chose to follow Eric and father James Berry to Tennessee.

Both said they wanted to play together in college. Both also said they ultimately thought Tennessee would be their home – they just wanted to make sure it was right before finally pulling the trigger early last November.

Now paired together on Tennessee’s defense, they focus more on improving a defense that finished 11th overall in the SEC last year. Both touted their versatility as one of their biggest attributes.

“I feel like I bring great versatility,” said Elliott, who is going to start out working at nickelback, but, at 208 pounds, could end up really anywhere in the back seven of the defense. “I feel like I can do things that not too many people can do. I give Coach Jancek that flexibility to do different things.

Evan is starting out focusing on cornerback, though he can also play safety and could even be a situational player on offense.

“I just want to get on the field as quickly as possible,” he said. “I don’t really care what position I play.”

Evan also said it’s hard to distinguish he and his brother in terms of what they do better than the other.

“That’s kind of hard,” he added. “Him and I work so hard on being diverse. Being able to play wherever coach wants us to play. We’re both kind of well-rounded.”

That’s the kind of attitude they bring to the team. They’re not Eric or James. They’re not each other. They’re not even defined by one position at this point. They just want to continue the legacy at Tennessee.

And if they happen to cause more turnovers than the other in the process, all the better.