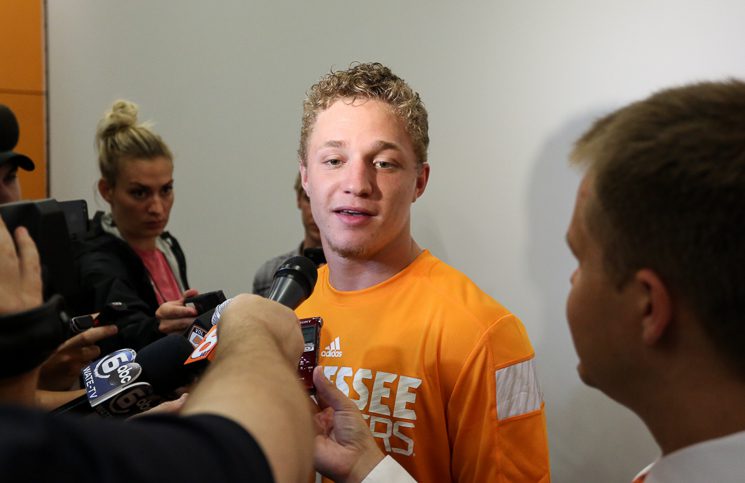 Vic Wharton was Tennessee’s first commitment of the 2014 class – a gift to Butch Jones on Christmas Day in 2012. He then set out on a mission to assemble one of the most talented classes in the country; a mission he would eventually accomplish.

As was the case for all of the legacy players during their unprecedented media session in the team room of the Anderson Training Center on Friday, Wharton was asked about the importance of not only the legacy players, but of all members of his signing class and the role they’ll have in resurrecting a once proud and dominant program. Something Wharton said he doesn’t take lightly.

“It means a lot, knowing that we’re keeping our tradition going,” Wharton said “That’s the main thing – the tradition of the program. We’re trying to get Tennessee football back to where it was and I feel like our class can help do that, along with the other players we have here.”

Wharton isn’t focused on recruiting anymore. He’s focused on football. He and the other members of the 2014 class are looking to make an impact for the Vols this season – an impact that Wharton says will come from a strong bond between teammates and a desire for hard work.

“It’s great. We couldn’t have asked for a better class. Our entire class gets along great. There are no flaws in the class. I just can’t believe that we’re all finally here, this class that we dreamed of.

Adjusting to life as a college player has been a challenging and rewarding experience for Vic. He enrolled in time for the first session of summer school and is currently in the midst of second session classes. But, according to him, it hasn’t been the academic adjustments that have been proved to be most difficult.

“Probably the weight room,” Wharton responded when asked about his biggest shock since arriving to campus. “I wasn’t expecting it to be so challenging but I’m happy that it is, and I don’t think there is a better strength coach in the country than Coach Lawson. I just feel that my gains have been tremendous, I never expected to be as strong as I am now.

“It’s awesome with Coach Lawson just making sure all the freshmen understand exactly what Tennessee football is trying to be and what we’re going to be. The coaches are doing a great job of making sure we all know what we’re supposed to be doing and our roles.”

All the adjusting hasn’t come as a surprise to Wharton, however. He said that the key to a successful summer rests in his ability to do just that – something the freshman wide receiver says has been made easier by both his teammates and coaches.

“I’ve had some guys take me under their wing, Josh Smith and Marquez North and those guys. The adjustment has been easy just because those guys have been making it easy.

“Coach Azzanni really does a great job of showing me exactly what I need to know, he has the other receivers – everybody is helping. I’m just doing everything that they’re telling me to do, the older guys, they’re doing a great job leading.”

Wharton said that he has focus strictly on learning the slot receiver position this summer and will be working solely with the offense once camp opens. He also said he’s been fielding extra punts and kicks alongside Pig Howard in hopes of helping out on special teams if needed.

And while Wharton said he is glad to finally shift his focus strictly to football and not recruiting, the 2014 ace salesman couldn’t help but offer one final pitch to prospects across the country on why they should choose Tennessee.

“Play for Coach Jones. I think he’s the best coach in the country, so if you want to play for a great guy, just come here. He’s a really family oriented guy and I just love that. I feel like I’m at home being here and he just does a great job of making everyone feel at home.

“I feel like he has my back and I feel like all of the other coaches have my back as well, just the entire staff in general.”