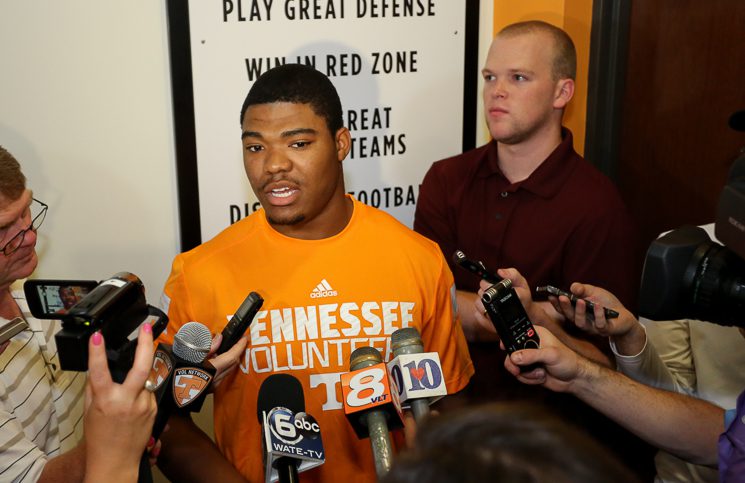 Todd Kelly Sr. filled several roles during his athletic career. He played both linebacker and defensive end in his collegiate and professional career that spanned from 1989-96. He was drafted in the MLB draft and was also a state champion in track.

But when it came time for his son, Todd Kelly Jr., to make his collegiate choice last year after fielding offers from many of the top programs in the nation, Kelly Sr. was only focused on one role: Dad.

“My sister is at Alabama and I didn’t know exactly where to go,” Kelly Jr. said. “And he was supportive, him and my mother, she went here as well and they just made sure I was happy and I got to visit wherever I wanted to and ultimately it came down to Tennessee and Alabama and I chose Tennessee.

“(Kelly Sr.) wasn’t biased at all. Most people would think that he would be, but mostly he just wanted what was best for me and wanted me to be happy which is how you’d want any father to be.”

That made the choice all Kelly Jr.’s. He admitted to giving strong thought of opting for Alabama.

He could’ve made his own name there in a sense. He could’ve been at a program with a better chance to win in the short-term. But Kelly embraced the responsibility of living up to his namesake at the place where he played.

“It’s a blessing,” Kelly Jr. said. “I couldn’t ask for anything better. I had the decision of whether to follow his footsteps or not and ultimately I did just because I feel that it’s a blessing and I think I can do it. … Having the same name as my dad deals with itself. I’ve had it all my life so I’m kind of used to it. I don’t know any other way.”

Now on campus, Kelly Jr. is learning to deal with the realities of the life of an SEC football player. His summer was eight days long this year – nothing but a short respite after graduating high school before he moved to campus and got enrolled in summer school.

He’s quickly bulked up to 203 pounds after playing closer to 190 in high school. He’s focused on the short-term goals right now – improving on a gradual basis. And though he’ll likely start out at safety, he’s willing to try whatever the coaches ask of him as he tries to live up to his father’s legacy.

“Just to get better each and every day,” he said of his goals so far. “I’ve learned so much since I’ve been here. The older guys have done a great job of taking in the freshmen and making sure we know everything we need to know and we’re doing the things we need to do. … I know they play a lot of freshmen on special teams. Ultimately, wherever they put me I’m going to go out and give it my all.”

And the good thing about not going too far from home is that he knows his father will be around to help guide him through the process. As the only Knoxville-based legacy to come in this season, he’ll cherish that as much as he can.

“Ultimately my dad is right up the street whenever I need to talk to him or need support. He’s always going to be there for me.”