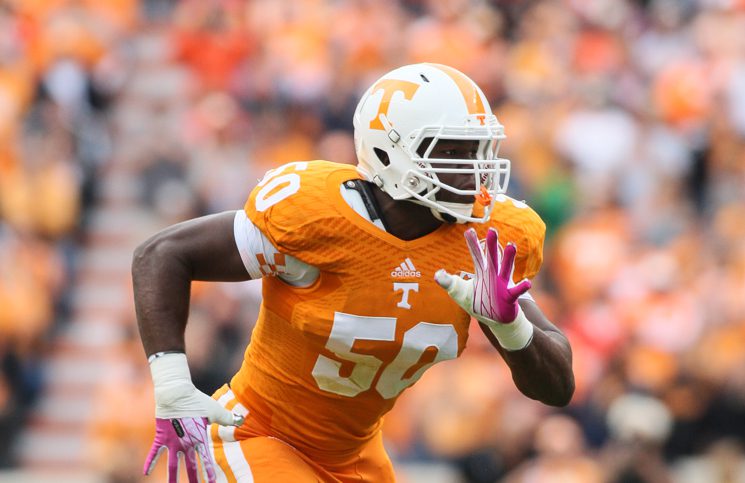 From an overall size, experience and depth perspective, Tennessee loses a ton from the 2013 season.

But unlike on the offensive line, where virtually every position is losing an NFL-caliber player, the defensive line needs some new blood – and some players that can get to the quarterback with consistency.

The D-line only recorded 17 sacks in all of 2013. And while that number isn’t incredibly impressive by itself, take out Corey Miller’s one dominant game against a weak Kentucky offensive line where he had 4.5 sacks, and the unit barely averaged a sack a game.

There’s optimism that the 2014 group of defensive ends might can get after the QB with more regularity. A lot of that stems from the return of Curt Maggitt, who sat out over a season after tearing his ACL in late 2012. The former outside linebacker will primarily play DE this year – a spot that coaches hope will open up his natural pass-rushing abilities.

Sophomore Corey Vereen, a relentless worker and a pass-rush specialist, has a good chance to man the other starting DE spot. Teamed with Maggitt, that duo can potentially give UT an edge presence it hasn’t seen regularly in the past few years.

Figuring out the defensive tackles is a little trickier. Though his motor wasn’t always going, it’s tough to replace Daniel McCullers from a sheer size and overall talent perspective.

Veterans Trevarris Saulsberry and Danny O’Brien project to see increased workloads inside. Saulsberry has a ton of upside, but staying healthy is his biggest challenge going forward. Junior college transfer Owen Williams was brought to Knoxville to play and, from what we saw in spring practice and have heard over the summer, it appears that he will. Those three are safe bets to be in the rotation inside.

Jordan Williams is the wild card – and potentially a very good one for D-line coach Steve Stripling. The rising senior has bulked up closer to 280 pounds and can play inside or out. Look for him to slide inside in the nickel to give the Vols a look such as Maggitt/J. Williams/O. Williams/Vereen to get after the passer in situations.

That’s most of what we know based on what’s been seen on the field. But a lot of the cautious optimism about this group comes from more of the unknown – particularly with the arrival of talented freshmen such as Derek Barnett, Dewayne Hendrix, Joe Henderson, Dimarya Mixon, Jakob Johnson and Michael Sawyers.

That group brings a lot of size, versatility and athleticism. We caught glimpses of Mixon and Johnson in spring camp and both looked like they could be in the conversation for immediate playing time. The rest we’ll have to wait until camp opens to get a feel for how they stack up on the field. It’s extremely realistic to say that several of this new bunch will play in Year 1.

Butch Jones on the need to play young players and to improve on the D-line:

“It starts upfront on the defensive line, that’s no secret. Everyone in our football program knows that these individuals have to be ready to go. Is it a great challenge to get a 17-18-year-old ready to play in the SEC? Absolutely, but that’s where we’re at in our program and it’s a tremendous opportunity.”

This one is tough. In the base 4-3, the best guess, based on what we’ve seen, would be Maggitt, O. Williams, T. Saulsberry and Vereen starting out with J. Williams and O’Brien both playing big roles.

But consider that extremely fluid. It’s not a matter of if freshmen will impact the depth chart, but rather which ones, and at which positions. Also look for second-year surges from returning youngsters Jaylen Miller and Kendal Vickers. Both showed some flashes in practice last year and should make a big jump in Year 2.

Defensive tackle Charles Mosley will be forced to take one this season after an unfortunate car wreck over the summer. With as many as 18 total scholarship D-linemen on the roster, not all will play, leaving the door open for a few of the freshmen to make this a developmental year. But with help needed immediately, we’ll have to wait and see who those ones are.