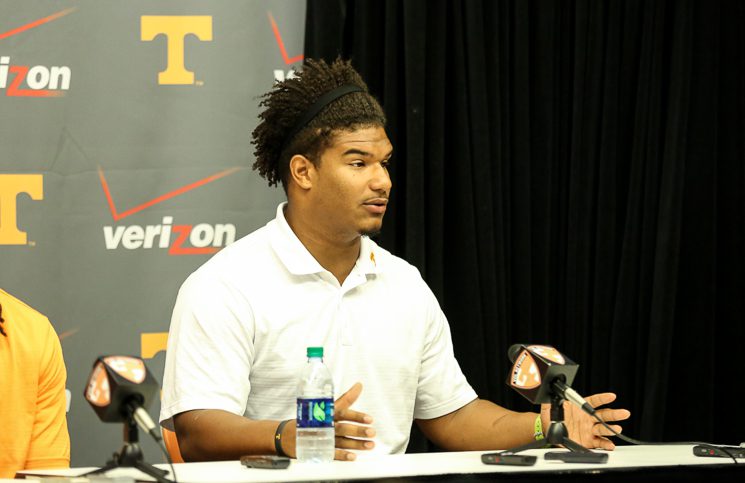 Tennessee senior defensive lineman Jordan Williams did all of the typical things you would associate with a summer training regimen for a college football player.

But despite all the hard work he put in, Chipotle, the burrito joint, might’ve been the most important part of his offseason. Pizza, pot roast and brown-sugared bacon were also a big help.

That’s because he was challenged to gain weight over the offseason in anticipation of his move to play more defensive tackle this season. Mission accomplished. After ending 2013 at around 255 pounds, Williams enters camp at 285 and is set to see significant time as a three-technique on the interior of the D-line.

“Putting that weight on that fast, it’s kind of tough, but I managed to do it,” Williams said at Tennessee’s pre-fall camp press conference on Thursday afternoon.

It was more than just a summer of gluttony for Williams. Butch Jones praised him for his work ethic, saying he might’ve had the best summer of any player on the team. A lot has been asked of the rising senior from Gainesville, Fla., as he enters his fourth year on campus.

He’s played defensive end, was moved to Jack linebacker in the 3-4 for one season, moved back to D-end and is now being asked to slide inside to help bolster an inexperienced group of defensive tackles. With starters Daniel McCullers and Daniel Hood moving on, Jones saw an opportunity for Williams to carve a niche inside. He approached him in the offseason about it and Williams was open to the opportunity.

“There are opportunities everywhere,” Jones said. “Jordan Williams is probably the greatest example on our defensive front. He’s played sparingly, has worked exceptionally hard. Jordan Williams has had as good of an offseason as any player in our program. He’s a great spokesperson, he’s leading, but he’s put the weight on we asked him to put on and he’s had a very productive offseason.

“Now, go take advantage of that. Reward yourself for the many sacrifices you made in the offseason so you can excel during the season.”

Williams, in many ways, is representative of what the defensive line hopes to be in 2014 overall: a little undersized at spots, but talented, hard working and, perhaps more than anything, faster than last year’s group.

Despite losing all four starters and a few other contributors, Williams thinks this group can be better than the 2013 defensive line.