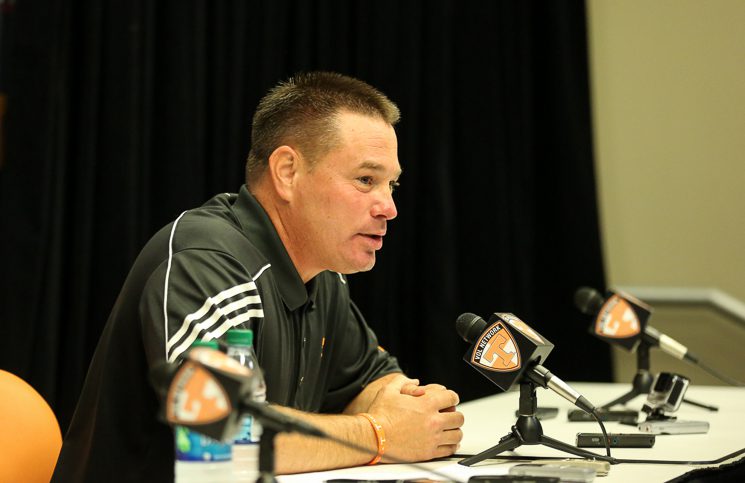 Fall camp is officially underway after today’s opening press conference – that featured Butch Jones and several players addressing their respective offseasons and looking ahead to tomorrow’s first practice of the summer. It was a very standard and low-key beginning to what promises to be a very busy month of camp leading up to the season opener against Utah State on August 31st.

It was clear that the players were all very relieved to be heading into this season with the same staff and running the same system after all of the turnover in recent years. All of them spoke of the strength and conditioning program in the offseason and how having the same coach with the same goals in mind for consecutive offseasons has really made a huge difference in their strength and speed.

Coach Jones and his team understand that the season will present many challenges and hurdles along the way and that they must use these next four weeks to simulate as many adverse scenarios as possible, but the coach made sure to point out that while they have yet to reach their goals, he does see a team that is working hard to get better every day.

Along with Butch Jones there were seven players that also took the podium on Thursday, so here’s a quick recap of what each of them had to say.

On the offseason: “We have had a very productive summer in all aspects of the football program starting in the classroom with summer school. Nobody has any eligibility concerns or issues and that’s a great thing. Everyone is qualified and ready to go.”

On former players: “I don’t like that I can’t name all of them because there were so many of them, but as we all know Peyton Manning, Jason Witten, Eric Berry – Chad Clifton was back for the first time since the indoor field was 60 yards – Albert Haynesworth, and then you look at John Gruden being here a number of days and my good friend Charles Davis. It’s critical for our players to see them coming around the program.”

On what it takes to win consistently: “It’s not just hoping to win, but it’s earning the right to win in your approach, your team chemistry, your leadership, your toughness both mentally and physically. What I like to refer to as your mental conditioning. You have to earn (the right to win) every single day.”

On the physical development of his team: “Last year at this time, I’d be sitting up here and be quietly concerned on our strength levels. We had zero players on the team who could squat over 600 pounds, very few 400 pound bench pressers, our flexibility was not where it needed to be…and we’re still not where we need to be overall as a program, but as I sit in front of you today we have eleven individuals who can squat over 600 pounds. Their bodies have changed. In terms of our overall strength levels, it’s a night and day difference.”

On the roster turnover: “I don’t know if there has ever been a roster flipped like this in the history of college football. Sometimes I feel like we are an expansion team with a couple of first and second round draft choices and some veterans. Our patience will be tried. We all get to be part of that journey and watch this team mature week in and week out.”

On the key to a successful camp: “It’s really just not getting mentally fatigued, honestly. Just battling both of them (academics and football). That’s why when you have days like this (no practice) you try to get ahead a little bit.”

On the young talent joining the team: “I’m really excited about the young talent. You know, I’m still young myself, but we’re coming together a lot. They just have a lot of potential and they’re real eager to work.”

On when things began to click for him last year: “I started to get a lot more confidence around the Georgia game. In high school I never played a lot of receiver. Just like Coach Jones said, it’s like a toolbox that you have with your receivers. You’ve got to know you breaking points, your blocking, your ‘63’ mentality, all of that. So I’m just trying to put all that together and build on that confidence.”

On balancing school and football: “Just scheduling your time. We have class, we have homework and study hall still. Being able to balance out football and your studies is very important.

On getting his chance to be a starter: “It feels like forever. I love playing football and I haven’t got to play as much as I’d like in the past, just waiting on my chance. Now that it’s finally here I’m ready to step up and get rolling.

On his offseason weight gain: “I started off the spring, I think I was 260. And now I’m about 285, feeling good, feeling solid. Just putting on the weight that fast, it’s kind of tough, but I managed to do it. It’s just a lot of eating. It’s eating and eating late, late at night.”

On being a team leader: “In January, coming back it was kind of like a wake-up for me. I remember every year coming back in January ready to start the next season, and looking around (this year) and we’re the old guys. Now everybody is looking at us, and that was a different feeling for me. It made me want to step up and be here for my teammates.”

On transitioning to D-Line: “I don’t think it will be a hard transition. I’ve got a lot of things I can work on to get better. This spring, I got some good work. I’m just ready to get after it and affect the quarterback so the DBs can play well.”

On improving the pass rush: “As a D-Line we want to affect the quarterback and we want to get off the field on third down. That’s going to be a big thing and third down is the most important down in football, so pass rush is very important.”

On the Manning Passing Academy: “A lot of people assume that I’m going to camp and learn stuff from Peyton and Eli, which I do, but it’s more for me to be a counselor for high school aged kids out there trying to learn the quarterback position.”

On Marquez North: “Everybody has made great strides. Some from year one to year two and Marquez is one of those guys. He’s been more vocal, taking more of a leadership role, taken some of these new guys like Josh Malone, Vic Wharton and Von Pearson under his wing. You’re seeing his confidence grow each and every day.”

On spending time with Coach George Whitfield: “They’ve been a great opportunity to get out there and get coaching from a guy who knows a lot about the position and just hear some feedback from an outside source to prepare for the upcoming season. It was a good opportunity to get better and continue to grow.”

On his Orange and White Game performance: “I was able to grow a lot (in the spring). A lot was thrown at us. I feel like I was able to end the spring on a very high note leading up to fall camp. My goal is to take my successful spring game and build on it, as I have over the summer, and into fall camp.”

On what he did to improve over the summer: “I just went home in May. I just worked with some receivers there and tried to get as much work in as I could. Then I’ve just been here working with the guys, competing with each other, having fun and trying to get the timing down with the receivers here. Just doing anything I could to be the best that I can be.”

On the new talent at receiver: “I think that all of our receiver have just improved so much, whether they’ve been here since the spring or they’ve been here two or three years. I think what you’re seeing is a lot of the old guys getting just so much better and then the new guys coming in with talent. And they’ve really improved, really been working their craft and listening to everything the coaches tell him.”

*The first practice of fall camp will be tomorrow (Friday, August 1st) at 7:25pm at Haslam Field. Be sure to check back in throughout the summer for practice notebooks, highlights, images, audio clips and more from the RTI crew.*