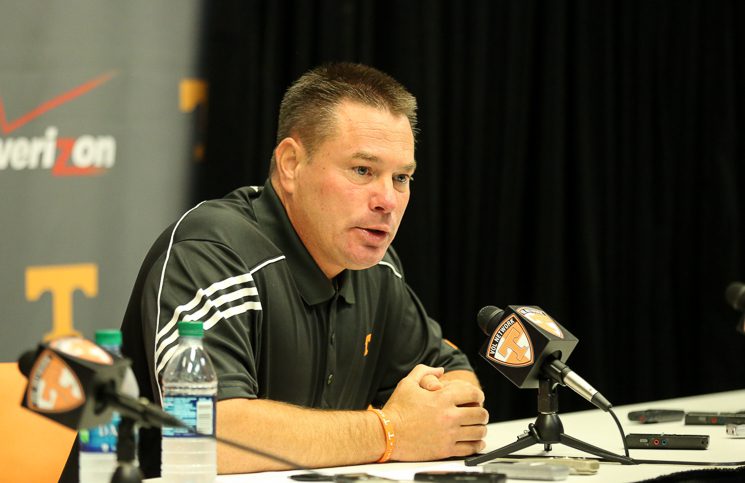 Butch Jones needs no reminder of how young his football team is. He doesn’t need a crash course in how many starters he has to replace along the offensive and defensive lines and he doesn’t need anyone whispering in his ear about how many freshmen he will be playing this year.

Through two weeks of fall camp Jones knows exactly what lies ahead for him and his football team. He deals with it every day. He knows they are a young and vastly inexperienced team tasked with traversing one of the toughest schedules in the country. The key to preparing his team, the coach says, is to focus on improvement, not mistakes.

“We’re very young. It cannot be an excuse, but it is what it is,” Jones said during Thursday’s press conference. “Trust me, I’ve already learned that throughout training camp. There’s good days, there’s bad days, and every opportunity is a teaching moment.

“It’s like raising your kids. It’s kind of the same message that you hear from me every day and it’s not going to change. We just have to be consistent and we have to get better.”

When asked if he had prepared himself for going through fall camp with such a young team, Jones acknowledged that he had. The ever demanding coach said that he began by setting realistic expectations for the newcomers and planning ahead for anything and everything that his team could be faced with during the summer and into the season.

“You try to create the mindset for yourself before training camp ever occurs, before the season ever occurs. You have contingency plans – you never want to be surprised. You always look at every possible scenario that could play itself out.

“I think sometimes that we’ve put a lot of expectations on this freshman class, and I think we have to step back and be realistic. A lot of these individuals, they’ve only been here since June and they’ve never taken a snap in a college football game. So, I think it’s stepping back as a football coach and being realistic.”

Realistically, Jones will likely be relying on 25+ of his newcomers to play significant roles on his football team this year – be it on offense, defense, or special teams. The trick for Jones is managing the younger players, both physically and mentally, to get as much out of them as he can without pushing too hard.

Pushing his young players too hard, however, isn’t something that Jones is worried about. He knows his team and they know him. These relationships began on the recruiting trail and were forged over their time together over the summer – something he thinks is paramount to their success on the field this fall.

“Youth is never a crutch. It’s never an excuse. We need them to get better right now. We’re trying to extract every ounce of value that we can out of them.”

That trust that Butch has built with his team is founded in consistency. With Butch Jones, the message never changes. He brings the same level of intensity to every practice and the expectation remains constant for all levels of his depth chart.

While fans and media may joke about certain catchphrases or hearing the same messages over and over from the Vols’ head coach, don’t expect Jones to mix it up too much moving forward. Jones has a goal in sight and his plan to get there is straightforward.

“I’m going to continue to say it, you win with consistency and you win with continuity. There are no quick fixes. It’s going to take some time, but I see us making tremendous strides – in growth, in development – each and every day, and I’m as excited and as encouraged as I’ve ever been.

“But, again, it’s going to take some patience. I’m extremely impatient, you can ask the players that, but we’re going to do it the right way.”