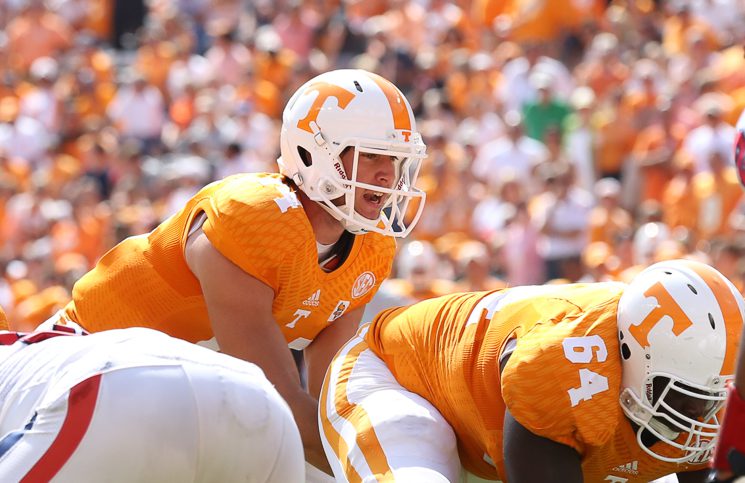 Admit it, you wanted somebody else. Anybody else. You wanted Josh Dobbs with his running ability, or Nathan Peterman in the feel-good story of the college football season. Heck, maybe you even wanted UMass transfer Mike Wegzyn to lead the Vols onto the field against Utah State – anyone except Justin Worley. I mean, surely one of these guys is good enough to put it all together and beat him out for the starting job, right?

It simply isn’t possible that the same guy who threw three interceptions against South Alabama could beat out multiple players with better arms, better legs and better stories…is it?

Look, if you wanted someone other than Justin Worley to be named the starting quarterback, you weren’t alone. As is the case nearly every year on Rocky Top lately, everyone has their guy that they want under center (or in Tennessee’s case, in the shotgun) when the season rolls around and 2014 is no different.

Worley doesn’t have Dobbs’ legs, Peterman’s arm or Wegzyn’s ‘new guy’ appeal, but what he does have is a level of consistency that the coaches are comfortable with – at least for one game – and that’s why he is your starting quarterback.

I will be the first to admit that in the practice work we have seen, be it drills, eleven on eleven, skeleton…etc. Nathan Peterman has outperformed Worley in my eyes. Granted, I don’t know the play calls, the progressions or the reads, but I know what completions and touchdowns look like. Peterman has appeared more composed, more confident and more explosive at the helm of the offense and looks like a completely different quarterback than the one we saw take the field in Gainesville last September.

But that’s his problem, unfortunately. He did take the field in Gainesville last September and it wasn’t pretty. His stat line read 4 of 11 passing for five yards, two interceptions and a fumble – and that’s a memory that no coach, fan or analyst will be able to forget until we see otherwise.

As improved as Peterman may be, Utah State is too strong of an opponent in game one to risk a repeat of what we saw in the Swamp and the coaches know it. Like Peterman, Dobbs also showed the propensity to turn the football over too much in 2013, throwing six interceptions while accounting for three touchdowns – all of the touchdowns coming in the final game of the season against a Kentucky team that only won two games. Even with his ability to scramble around and make plays on the run, it took him until his fifth game to put the ball into the end zone. The Vols need a quarterback who can protect the football and put points on the board.

Which brings us back to Worley. He isn’t flashy, doesn’t have a rifle arm, and certainly won’t be confused with Johnny Manziel when he scrambles around, but he offers a level of consistency that the others have failed to show up to this point. Yes, he did throw three interceptions against South Alabama, but he also threw two touchdowns. Worley wasn’t outstanding against Georgia or South Carolina, but he moved the chains when he had to, led touchdown drives and he didn’t turn the football over – strong accomplishments given his lack of help at the receiver position.

Worley was playing his best football last year when he got injured against Alabama, so, naturally the coaches are hoping that he can pick up where he left off. Another year in the system and the addition of talent at wide receiver, tight end and running back will make his job a little easier, even  as a brand new offensive line struggles early in the year.

Butch Jones and offensive coordinator/quarterback coach Mike Bajakian have been very complimentary of Worley during fall camp. They have praised his leadership, his command of the offense, his decision making, and most importantly, his consistency. Worley has made some bad plays this camp, no doubt, but he usually doesn’t string them together the way we’ve seen the other quarterbacks do in the past. Of all the quarterbacks, he has best demonstrated the ‘snap and clear’ mentality that Jones has tried to instill in this football team. Justin never gets too high or too low and really doesn’t play the game with a lot of emotion. Some people like that and some don’t, but emotional players tend to play the game in waves and that is exactly what this coaching staff is trying to avoid.

The coaches wanted someone who is steady. Someone who knows the offense. Someone who doesn’t get down on himself after a mistake or overconfident after a good play or two. They wanted a player that can limit turnovers and get the ball out quickly to the playmakers. They didn’t want a game breaker, they wanted a game manager.

That’s why it had to be Worley.

They wanted to put the player out there who had the smallest chance of having a meltdown in front of a packed house for the season opener, and at this stage in their careers the senior from Rock Hill, South Carolina is their best bet.