Butch Jones refers to season openers as the “game of the unknowns.” That’s incredibly applicable for Sunday’s contest between the Vols and Aggies. Both teams are replacing a lot, have very few common opponents in recent years and these programs have never met. One thing we do know is that Utah State knows how to win. The Aggies (9-5, 7-1 Mountain West in 2013) have won 25 of their last 33, and those few losses have come by an average of less than one touchdown per defeat. Tennessee, meanwhile, is looking for its first winning season since 2009 and is coming off a 5-7 campaign in 2013. This will be an intriguing game between a program working on putting itself on the map nationally and a more traditional program working to restore its reputation.

Who has the edge

Justin Worley won’t have to make a ton of dazzling throws to beat Utah State. The key for the senior will be to get the ball out quickly and accurately, and then let his playmakers go to work. The Aggies lack experience in the secondary with free safety Brian Suite being the only player with significant experience returning. Daniel Gray, a familiar name to Tennessee fans, will man one cornerback spot and the other defensive backs will all be either junior college transfers or others with little experience. One things UT has done well in many recent non-conference games, even when down as a program, is out-athlete the opponent on the perimeter. We saw it against NC State, Cincinnati, Montana and others in recent years. With this group of receivers and tight ends getting back to what UT is more used to, expect the Vols to have several explosive plays through the air. Edge: Tennessee

The battle on the line of scrimmage will be unknowns vs. unknowns up front. Defensive end B.J. Larsen is the only returning starter for the Aggies on the d-line, while it’s been well-documented that Tennessee is replacing all five starters from last year’s offensive line. Utah’s linebackers, particularly Kyler Fackrell, are the strength of the defense and could make it difficult for Tennessee to find consistent room on the ground. This will be a good test to see how far Marlin Lane has come and just how good Jalen Hurd can be. Controlling the ground game – especially if the weather is bad – will be key for the Vols. They’ll have a chance to do that, but it won’t be easy. Edge: Even 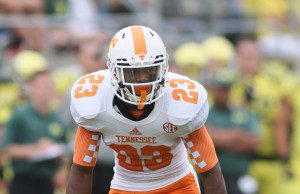 If Chuckie Keeton is his old self coming off the injury – and there’s no reason to believe he isn’t – he is one of the best decision makers in college football. His fantastic 56/13 touchdown-to-interception ratio is proof of that. What makes him difficult to defend is how he can use his athleticism to extend plays. Yes, there are questions about the Aggies’ offensive line and their skill players. But Keeton can help both of those groups by scrambling around and creating – wearing out the defensive line and causing breakdowns in the secondary. He doesn’t have a clear go-to receiver, though three options – JoJo Natson, Brandon Swindall and Ronald Butler – all caught at least 20 passes last year. Tennessee’s secondary is more experienced and faster than last year, but it’s clearly still a work in progress. It isn’t even 100-percent known who one of the corners will be in the nickel look at this point. Look for the Aggies to make some plays through the air. Edge: Utah State

A lot has been made about Keeton’s return from injury, but running back Joe Hill, the projected starter, is also coming off a knee injury. And like Tennessee, Utah State is replacing a ton on the offensive line, returning just one starter – Kevin Whimpey. The Aggies were middle-of-the-pack in rushing last year with an average of just under 179 yards per game on the ground. You have to factor in Keeton’s ability to take off as well, however. Keeping contain was a problem for UT’s defense last year. Three opposing quarterbacks – Maty Mauk, Nick Marshall and Tyler Murphy – all ran for over 80 yards against the Vols in 2013. If Keeton gets loose a few times, that could certainly shift the advantage in this one. But look for UT’s inexperienced, though athletic, defensive front to cause some issues in this area. Their lack of size shouldn’t hurt them too much in this one. Edge: Tennessee

The Aggies simply have more experience in the kicking game with the duo of P Jaron Bentrude and K Nick Diaz. JoJo Natson is a threat in the return game and Aggies had some of the best coverage units in the nation last season. For Tennessee, Matt Darr had a good camp and should help solidify the punting. There still is no official starting kicker, and players such as Cam Sutton and Evan Berry could be making their debut in the return game. That’s not to say that the Vols couldn’t break something, but the Aggies, on paper, look like the better special teams unit overall. Edge: Utah State

What Utah State is thinking

We’ve got this. With Chuckie Keeton healthy, we’ve gone to Auburn, Wisconsin and USC and taken each down to the wire. Tennessee, with all its newcomers, won’t be able to finish the job this time. Chuckie and Kyler Fackrell will be two of the best players on the field and we’re better than Tennessee realizes at several other spots. We’ll win the special teams battle, capitalize on mistakes from a young Tennessee team, take this into the fourth quarter and make a play at the end to win this thing.

What Tennessee is thinking

We have to limit Keeton, but if we can do that, we have an advantage in overall talent and athleticism across the board. We’ll get the ball to Marquez North, Von Pearson, Pig Howard and others and make big plays. We’re physical enough to run the ball too. Utah State isn’t used to tackling guys like Marlin Lane and Jalen Hurd, and our O-line has a chip on its shoulder. Justin Worley will pick up where he was in the middle of last season. He’ll take care of the ball, get us in the right play and get the ball out quickly. We need to play well, but if we do, we can win this, maybe even with some room to breathe.

This is a scary opener. There’s no denying that. Utah State can and will beat Tennessee if the Vols aren’t focused. There isn’t a ton of margin for error for either side. Still, if Tennessee plays 60 minutes of disciplined football, gets the ball to its playmakers and limits mistakes on defense, the Vols have a great shot in this one. A sold-out, overwhelmingly-partial crowd will be a huge boost for this young team as well. We’ll have our official score picks on gameday, but we feel that Tennessee holds the overall edge heading into Sunday.