Key Stats Point to Josh Dobbs as the Future 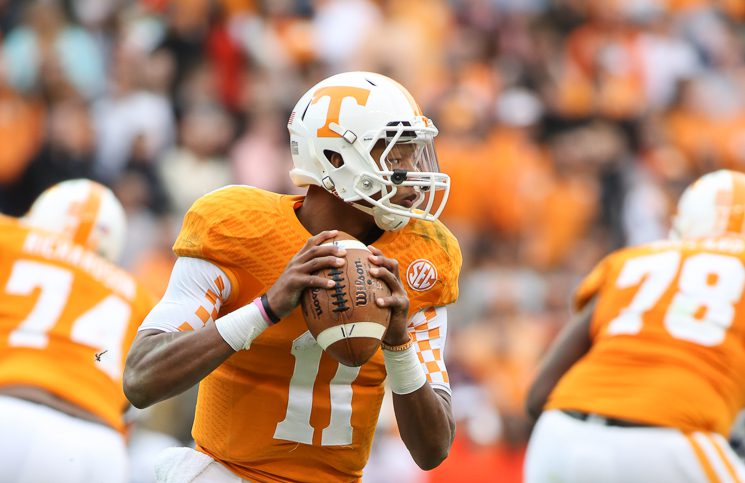 Saturday, the redshirt was lifted and Tennessee quarterback Josh Dobbs took the field for his first snaps of the season. Dobbs played in five games (and started four) last year to mixed reviews, but his performance Saturday gave life to an anemic offense and injected Vol fans with something they desperately needed – hope. In limited action, it’s clear that Dobbs possesses enormous potential. While no one, including Butch Jones, is ready to “crown” him as the quarterback of the future, several key stats from his appearance Saturday and his starts last season point to a bright future for Josh Dobbs and the Vol offense.

Though he didn’t play the first two series, Dobbs managed to lead the Vols to 20 points – including two offensive touchdowns. While that number doesn’t seem impressive at first, it’d been nearly 10 quarters of SEC football since the Vols had scored a touchdown when Dobbs, playing just his fourth series of the year, led the team on a 10 play, 84 yard TD drive midway through the second quarter. The very next drive, he led the Vols to a field goal as the first half expired. The drive after that, the Vols marched 84 yards in 15 plays to cut the Alabama lead to 10.

This one takes a bit of explaining. QBR is a stat ESPN developed and, though it has its flaws, it’s a good measure of what a QB does with both his legs and his arm. You can read more about this stat here, but in the meantime think of it as a more complete passer rating on a scale of 1-100, with 50 being average. Last year, Jameis Winston led the nation in total QBR. He won the Heisman. The year before, Johnny Manziel led the nation in the same category. He also won the Heisman.

All that to say, the stat clearly has its merits. Josh Dobbs’ QBR of 81.7 against Alabama would rank 10th nationally this season. That number puts him ahead of guys like Jameis Winston (81.4), Everett Golson (75.4) and Trevor Knight (79.9) and just behind Dak Prescott (83.2).

To be fair, Justin Worley posted a QBR of 83.4 against Georgia this season, but that was his best statistical game in 24 career appearances and Dobbs nearly matched it in his first game of the season. Dobbs will ultimately have to sustain the type of success he had against Alabama to keep the starting job, but he clearly has the potential to be great.

Consistency is likely to be an issue with Dobbs until he gets more practice and game reps, but the early returns suggest he has the ability to be a very productive quarterback at this level.

Alabama came into Saturday’s game allowing just 66 yards per game on the ground. Dobbs bested that by himself. His 75 rushing yards were the most by a Vol QB since Tee Martin ran for 81 against Syracuse. Last season, he ran for a 40-yard touchdown against Kentucky, the longest rushing TD from a Vol quarterback since 1983 (Alan Cockrell).

He’s had a run of at least 30 yards in four of the five games where he’s played more than a half. Dobbs is a dynamic athlete and clearly adds a new dimension to Tennessee’s offense. His rushing threat helped open up lanes for Jalen Hurd and Marlin Lane. The Vol ground game accounted for 181 yards Saturday, the most rushing yards against Alabama in the series since 2010.