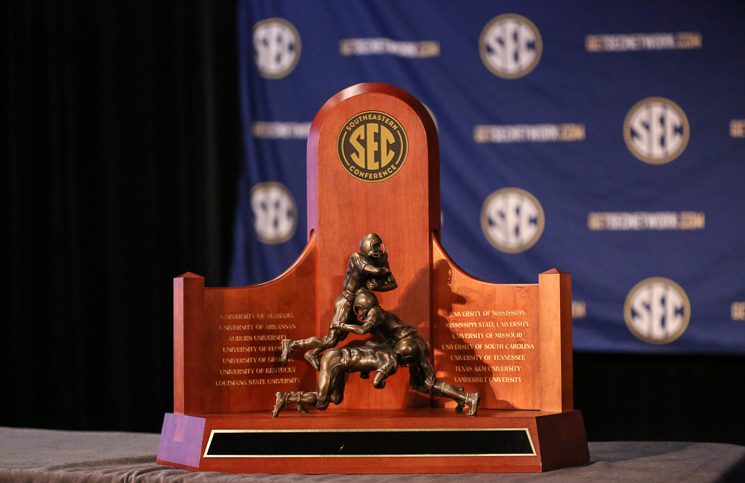 Well that’s is. We give up. The RTI crew, that is. Because it’s seldom been harder to rank these teams. Particularly in the East when we scratch our collective head in utter amazement at the placement of some of these teams. For the second week in a row! Because there was very little movement in the rankings this week.

That said, let’s get on with it.

Vanderbilt showed out in Columbia, Missouri. An embarrassment of riches with two offensive touchdowns. That’s an average of one per half, people. This week they’re favored by double digits against Old Dominion. If you need tickets, you’re in luck, but you’ll have to pay for them. Two dollars. Seriously.

Vol Nation left Neyland on Saturday night with good reason to be optimistic. Josh Dobbs gave Tennessee a much needed spark on offense. It was the first game all year that the RTI crew graded the offense better than the defense. That said, the Vols are still looking for their first SEC win which is why Tennessee sits 13th in this week’s SEC Power Rankings. But if the Vols beat South Carolina on the road on Saturday night, they’ll begin their ascension.

Florida’s coming off a much-needed bye week. We were tempted to slide the Gators down since one has to presume they’ve gotten worse since last time they played, because that’s pretty much been the trend all year. But in the name of fairness, we kept them at No. 12, two SEC wins being their saving grace. For now at least.

Good news: they walked the dog last week.
Bad news: it was against UAB.

The “fat guy” touchdown pass was sublime. But they still have zero wins in conference, and not even a fat-guy touchdown pass can change that. Still, it’s worth noting, that was the heaviest dude to throw an SEC touchdown since Jared Lorenzen.

The Gamecocks played Auburn a lot tougher than anyone would have imagined. Though, to be fair, South Carolina’s offense isn’t the problem. Their defense, however, is another story. They rank 11th, 13th and dead last among SEC teams in passing, scoring and rushing defense. Early line has the Gamecocks favored over UT by eight in Columbia.

We’ll just see about that.

Many believe Kentucky could lose the rest of their games. Everyone knows they’ve lost their last two. So how can they possibly be ranked No. 9 in the SEC Power Rankings? Simple. They’re tied for third in the East with Florida, a team currently in free-fall mode. And say what you want about the Mississippi State defense, but Patrick Towles and the Wildcat offense threw up 31 points on the No. 1 ranked team in the land. We’ll learn more about them this week when they travel to Mizzou.

It’s only appropriate then, that Missouri is just ahead of Kentucky. Again, the same phenomenon. How in the world are they ranked No. 8? They were up just three at home deep into the fourth against Vandy. But they’re 3-1 in the conference, behind only Georgia in the East. That said, they’ll have all they can handle against Kentucky.

Get out the saucers and milk. There’s gonna be a cat fight.

If there were any justice in this world, LSU should move up in the rankings. Yes, because they beat No. 3 ranked Ole Miss, but also because of Tiger Boy’s trolling of his woman, the Ole Miss Miss, in the Ole Miss Fan Crying Video. His impromptu impersonation of the LSU band at the height of her drunken despair was next level. Behold:

Sadly, there’s no place for them to jump. Still, gotta hand it to Les Miles. He now has 24 — TWENTY FOUR — fourth-quarter comebacks during his time at LSU. (That’s unreal.) And he’s guided a team that’s in re-load mode (with no proven quarterback ) to a 7-2 start despite playing in the most loaded division in all of college football.

The Bulldog were off last week as they prepare to face the Florida Gators in Jacksonville on Saturday. They’re a yip away from being undefeated. Of their remaining games, only Auburn looks to pose a real threat. And, they’ve weathered the storm after losing their best player. The NCAA just ruled that the storm will continue for two more games.

In the first-ever College Football Playoff rankings, the SEC West claimed three of the top four spots, four of the top six, which goes to show you two things: first, the West is loaded. But next, when each of the top four are such legitimate national championship contenders, the proper order in which they should be ranked could be argued till the cows come home. I happen to agree with the Committee, but I was in the minority.

Because the RTI boys didn’t think Bama should be ranked below Ole Miss. Well tough luck, boys. If Bama wanted a higher ranking, then they shoulda beaten them three weeks ago. Much like if Tennessee wanted to be ranked ahead of Florida…well, you get my point. So, yes, Bama won last week, but they still drop a spot to No. 4.

What a disappointing performance Saturday night against LSU. To get just seven points is brutal. But to self destruct down the stretch is another thing altogether. The near pick. The pick negated by penalty. The delay of game penalty that turned a 42 yard game-tying field goal attempt into a 47 yard game-tying field goal attempt. The subsequent decision to trot the offense back out with nine seconds to play. Then the dagger, the throw Wallace couldn’t throw but did anyway, the game-clinching interception with two ticks on the clock.

In the immortal words of the Ole Miss Miss. “Ole Miss Football is my life, Robert.”

They get a chance to bounce back next week in Oxford against Auburn. If they beat the Tigers, then run the table, they’d win the West no matter what.

Auburn had a bit of a scare against South Carolina, but it’s sorta forgivable when you consider the following: South Carolina basically had three weeks to prepare for them. A bye, then Furman. And maybe Auburn was guilty of looking ahead to Saturday’s matchup in Oxford. Either way, they got the road win and need to win out. The matchup next week in Oxford will be epic.

If you’re a Bulldog fan, that defense has to alarm you. They’ve given up a ton of points (including 31 to Kentucky) and rank dead last in the SEC in points allowed. Can the big three of Dak Prescott, De’Runnya Wilson and Josh Robinson continue to outscore their opponents? Still, I maintain their schedule plays out well for them. Yes, they have Bama and Ole Miss, both on the road. But they also have UT Martin and Vanderbilt the week before each. Which means they’ll really get two weeks to prepare for the last two things that will stand between them and the No. 1 overall ranking in the first ever college playoffs.