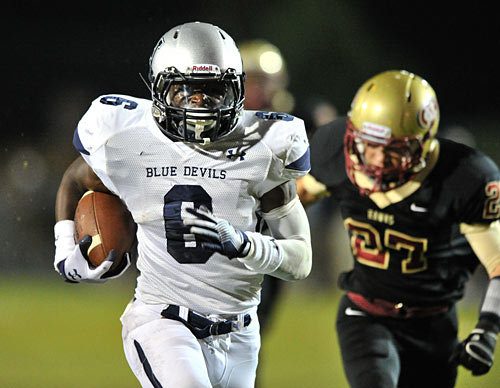 We’ve rounded up some commitment stats and notes. As generally is the case with high school statistics, consider them unofficial since they were gathered from various local sources. Several players’ seasons are over as teams get deeper in the high school playoffs.

QB Jauan Jennings: Jennings’ career at Blackman came to an end at the hands of future teammates Kyle Oliver and Jack Jones and Oakland High School. Jennings, who ran for a touchdown earlier in the game, led Blackman down near the goal line late in the game with a chance to cut it to one score, but was unable to get that touchdown, essentially ending their chances for a win. (via the Daily-News Journal)

RB Rocky Reid: Reid’s Concord career came to an end, but the record-breaking running back, despite missing a portion of the game with an injury that he returned from, still went out with 23 carries, 146 yards and at least one touchdown. Reid leaves Concord as his county’s all-time leading rusher. (via the Charlotte Observer)

RB Alvin Kamara: Hutchinson Community College’s regular season is over, but they will play in a bowl on Dec. 6. Kamara has been named the KJCCC Offensive Player of the Year. Despite only playing in nine games due to injury, Kamara finished the regular season with 172 carries, 1,211 yards (7.0 ypc) and 18 touchdowns to go along with 18 receptions for 219 yards and three receiving touchdowns.

TE Kyle Oliver and OL Jack Jones: Oliver had a huge 54-yard touchdown reception where he broke multiple tackles in Oakland’s playoff win over Blackman. Oliver and Jones will now move on to face another Tennessee commitment – Maryville defensive end Dylan Jackson – in the 6A state semifinals. (via DNJ)

ATH Joc Bruce: Bruce’s impressive career at South-Doyle came to an end as the Cherokees fell to West High School in the state quarterfinals. Bruce – who plays multiple positions on both sides of the ball – had a few impact plays, including a 30-yard touchdown pass. Bruce has been a key player in South-Doyle’s turnaround from one of the doormats of their classification to a team that was in the hunt this season.

ATH Vincent Perry: Perry was all over the field as Hillsboro rolled into the semifinals with a 42-7 win over Shelbyville. Perry scored three touchdowns – two rushing and one receiving – and turned some heads in the process.

DE Andrew Butcher: Butcher’s Alpharetta team fell in the playoffs by the final score of 44-14. Butcher did have a fumble recovery in the game, but the McEachern offense was just too much for Alpharetta on Friday night.

DE Dylan Jackson: Maryville’s defense shut down Science Hill’s offense for four quarters and advanced with a 45-0 win. Dylan Jackson had a fumble recovery in the game, but Science Hill never really challenged the Rebels in this game.

DT Quay Picou/LB Austin Sanders: Buford High School continues to roll, as they beat Mary Persons on Friday night by the final score of 35-14. Buford’s current win streak is now at 37 games and the Wolves have now reached the quarterfinals for the 16th year in a row.

CB Micah Abernathy: Abernathy’s biggest impact in his game came on the offensive side of the ball. The Vol cornerback commit was able to score three touchdowns as GACS advanced over Lamar County by the final score of 48-20.

QB Austin Kendall: No official stat line to report for Kendall, but he was able to toss six touchdown passes as Cuthbertson rolled over Asheboro 48-14.