The Vols are hosting four members of the 2015 recruiting class this weekend, as Quinten Dormady, Chance Hall, Alvin Kamara and Kyle Phillips are all in town for their official visits. Dormady, Hall and Kamara are all currently committed to Tennessee and are actually set to enroll early, so this weekend is little more than a formality for those three. Phillips, however, is a slightly different story. This is the final official visit for Phillips before he will make his decision in the coming weeks and enroll early at his school of choice in late December/early January.

Here’s a quick look at who’s in town: 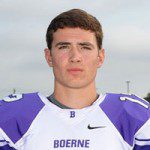 Dormady is a lock to Tennessee and will actually be joining the Vols over the next few weeks as they prepare for the TaxSlayer Bowl. It was originally thought that Dormady would suit up and join the Vols for a few practices, but after evaluating his throwing shoulder it appears that the staff has chosen to hold him out until spring practice begins as a precautionary measure. There is still a chance that he gets some reps over the next week, and we aren’t ruling it out, just relaying what we’ve heard.

Hall missed his senior season with a torn achilles tendon, but by all accounts is recovering nicely and will enroll at Tennessee in the coming weeks. It isn’t clear exactly how much work Hall will be able to participate in during spring practice, but he will at the very least get a head start in the weight room and film room with Don Mahoney and the rest of the offensive linemen.

The early enrollee at running back was an absolute machine for Hutchinson Community College this year, finishing with 172 carries, 1,211 yards (7.0 ypc) and 18 touchdowns to go along with 18 receptions for 219 yards and three receiving touchdowns. Kamara accomplished all of this in only nine games for the Blue Dragons on his way to  KJCCC Offensive Player of the Year honors. Kamara missed the final game of the regular season and Hutchinson’s bowl game with an injury, but should be completely healthy when spring practice starts. Much like Hall and Dormady, his visit this weekend is simply a formality.

Phillips is Tennessee’s most important visitor this weekend, simply because the Vols are still trying to earn a commitment from the talented in-state defensive end. Securing his final official visit is a huge positive for the Vols, as this weekend will be their final chance to get him to campus and convince Kyle that Tennessee is the place for him. With the news that freshman defensive end Dewayne Hendrix may be looking to transfer, Phillips becomes one of the most important recruits left in the 2015 class for Tennessee. With the success fellow mid-state defensive end Derek Barnett had this season, the coaches will surely be selling Phillips on the opportunity to have that same type of success in the 2015 season. With the recent news that Ugo Amadi decommitted from Ole Miss and will announce between LSU and Tennessee, the momentum appears to shifting in Tennessee’s favor. Amadi and Phillips have said numerous times that they intend to play together in college, and right now the Vols are trending ‘up’ for both prospects.