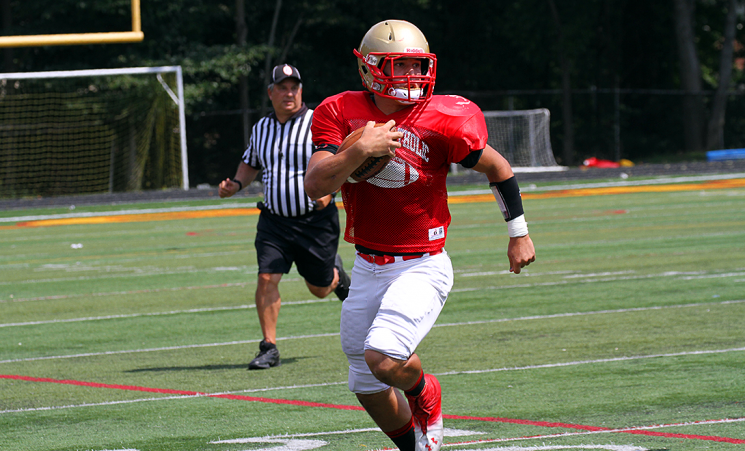 Austin Kendall’s March decommitment from the Vols at first looked to be a setback for the 2016 class.

Butch Jones got an early return on Tax Day Wednesday afternoon, however, when ultra-talented four-star quarterback Jarrett Guarantano committed to the Vols, choosing Tennessee over in-state Rutgers, a team his father played for, and defending national champions and dual-threat quarterback mecca Ohio State.

Guarantano (6-4, 200 pounds), a native of Oradell, N.J., is a consensus four-star prospect, ranked as high as the No. 4 dual-threat QB in the country and the No. 91 overall player in the nation by Rivals.com.

“Is a good looking prospect physically with developmental upside to his frame,” ESPN.com wrote in a scouting report. “Is a very good overall athlete who throws the football very well on the move. Has good footwork and set up and throws from a balanced platform. Can get rid of the football quickly and is very efficient in the short and intermediate passing game. Is an efficient and productive player in an offense that requires many different types of throws.”

While the pull to play for his in-state, legacy school was no doubt strong on Guarantano, it was a relationship with new Tennessee offensive coordinator Mike DeBord and head coach Butch Jones that won out in this heated recruiting battle. Jones was actually a graduate assistant at Rutgers when Guarantano’s father, James, played receiver for the Scarlet Knight from 1988-92, and that relationship paid off big time for the Vols in this recruitment.

Guarantano first visited the Vols in the summer of 2014, another testament to Jones and his staff’s ability to get players on campus early and at least spark interest. Even with Kendall on board, Jones had an in-home visit with him in the fall to keep working on the relationship, and his interest really seemed to rev up following a several-day unofficial visit to Knoxville on the weekend of March 22.

Favorite QB to ever play the game .. Coach Butch and the coaches hooked this up ! #VolNation #GBO #VFL pic.twitter.com/HtVvTKdOYD

In many regards, he’s an ideal quarterback for the system that Jones utilizes at UT. He has the mobility to keep defenses honest, an arm that can make all the throws needed at the SEC level and a football background that makes him a good candidate to grasp and lead the offense.

While a lot can change over the course of a year, he’ll likely walk into a pretty crowded quarterbacks room in 2016. Current starter Joshua Dobbs will be entering his senior season, while the Vols recruited three, four-star quarterbacks in the 2015 class. Two of them – Quinten Dormady and Jauan Jennings – are already on campus this spring, with the third, California-product, Sheriron Jones scheduled to come this summer.

So in a sense, early playing time may not be realistic for Guaranatano. But with Dobbs out after 2016, that position should again be completely up for grabs at that point, and there’s always at least the possibility that at least one of the three-man quarterback class from this signing day could seek another opportunity if the first year doesn’t work out as expected.