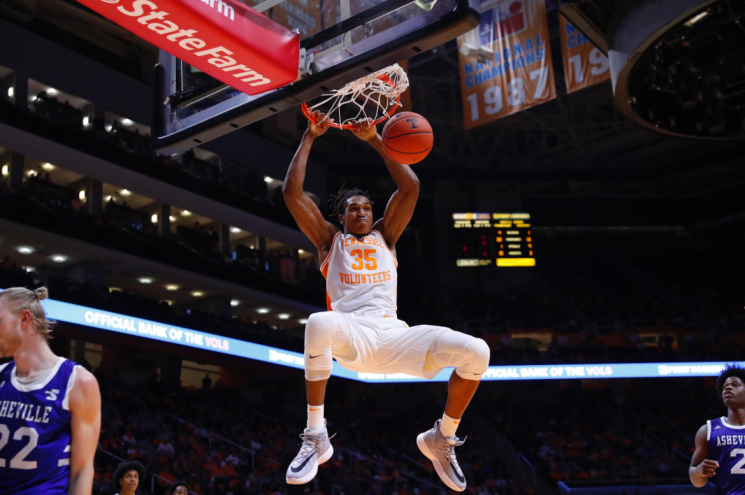 The new-look Tennessee men’s basketball team got off to a slow start, but they regrouped and won handily to open up the 2019-20 season.

Tennessee led by as much as 25 in the second half against UNC Asheville on Tuesday night, and the Vols defeated the Bulldogs 78-63 in Thompson-Boling Arena to start Rick Barnes’ fifth season as head coach.

The Bulldogs hung around for a lot of the first half thanks to erratic play from the Vols. Tennessee turned the ball over 12 times and gave UNC Asheville plenty of extra opportunities.

In the end, though, Tennessee put the game away in the second half thanks to an 8-0 run, a 7-0 run, and another 7-0 run at various points in the final half of play.

Here are our five biggest takeaways from the Vols’ season-opening win.

Yves Pons played the best game of his career as a Vol on Tuesday. Granted, his performance came against a UNC Asheville team that won just four games last season, but the Bulldogs looked improved. And it wasn’t like Pons put up a bunch of stats against the Vols’ lower-tier opponents last season, either.

On Tuesday night, Pons lit it up.

The junior scored a career-high 15 points on 6-of-8 shooting. Pons looked more comfortable in his new role on offense, and he thrived in the paint. Only two of this eight field goal attempts came from three after 25 of his 37 shots last season were three-point attempts.

Not only did Pons thrive in his starting role when it came to putting points on the board, but he was effective in other areas, too. The French wing brought down seven rebounds — five of which were offensive boards — and he dished out two assists and blocked three shots. He even got a steal on the defensive end.

Pons wasn’t the only returning Vol who stepped up in a new role, though.

Jalen Johnson scored a career-high eight points and made two of his four shots from three. He added a career-high six rebounds to go along with his career-high in points, and he had two assists and a block, too.

Last season, Johnson averaged 5.8 minutes a game and was seldom used. On Tuesday, he totaled 23 minutes.

Click the image above and use the coupon code OW15 to get 15% off your Barnestorming tee while supplies last!

In the first half, it was evident this was a completely different Tennessee team than Vol fans had come to know over the last two seasons.

The Vols lacked the chemistry that had come to define them the last two years during the Grant Williams, Admiral Schofield, and Jordan Bone era. Tennessee was very careless with the ball, and players were pressing far too much.

Lamonte Turner was trying too hard to fill the shoes of all three of UT’s NBA Draft picks, Josiah-Jordan James looked like he felt the pressure of being a five-star in his first game, and Jordan Bowden and the rest of UT’s returning players (with the exception of John Fulkerson) were trying to force things.

Tennessee totaled 12 turnovers in the first half of play, and the team was just 1-of-5 from the free throw line. Turner was 3-of-9 from the field, James missed all three of his shots, and freshman Olivier Nkamhoua was just 2-of-6.

But the Vols settled down in the second half, and things got better.

Turner was 4-of-8 and dished out four assists after only getting two in the first half. Yves Pons. John Fulkerson, and Davonte Gaines were efficient, combining to go 9-of-12 from the floor. As a team, the Vols only turned it over five times in the second half after 12 first half turnovers.

The Vols were pushing too hard in the first half, but they were able to recover.

Despite Uros Plavsic sitting the bench after the NCAA denied his immediate eligibility waiver, Tennessee had no trouble scoring points in the paint against UNC Asheville.

Over half of the Vols’ 78 points came near the basket. Tennessee totaled 48 points in the paint on Tuesday night, and everyone contributed to that. Pons was a big reason UT was able to get points near the bucket, as was John Fulkerson. The 6-foot-9 junior post player totaled 10 points and nine rebounds in his 27 minutes of action. Tennessee held UNC Asheville to 32 points in the paint.

The Vols not only outscored the Bulldogs pretty handily in the paint, but they also out-rebounded them pretty decisively, too.

Tennessee pulled down 49 rebounds on Tuesday, while UNC Asheville managed just 29. The Vols grabbed 17 offensive rebounds, continuing their trend from last season of ripping down tons of offensive boards.

At times last year, Tennessee got complacent on defense because they knew they could fall back on their offensive prowess. This year, at least for the first game of the season, UT looked sharp defensively.

The Vols held UNC Asheville to 37.5 percent shooting overall and only 23.5 percent from three. Some of that had to do with the Bulldogs just missing shots, but a lot of it was because of UT’s defensive effort.

Tennessee finished with seven blocks on the night, and Yves Pons had almost half of them (3) by himself. John Fulkerson got a block and altered several shots, and Josiah-Jordan James made up for his struggles on offense with solid play on defense. He blocked a shot and was a big reason why UNC Asheville’s leading returning scorer from last season, Devon Baker, finished with just seven points on 2-of-10 shooting. Baker averaged 16.1 points a game last season.

UNC Asheville turned the ball over 14 times, and they only managed four assists on offense. Tennessee’s strict defense was part of the reason for that.

The Vols held opponents to 63 points or less just 11 times in 37 games last season after doing so 20 times in 35 games in 2017-18. Tennessee looked more defensive-oriented on Tuesday night, and it’ll be interesting to see if that carries over the rest of the season.

Last season, Tennessee didn’t have a scholarship freshman play a single minute during the season. On Tuesday, freshmen played a big role in UT’s win.

Three of the Vols’ four 2019 signees played against UNC Asheville, and all three played at least 10 minutes of the game. Josiah-Jordan James played the most, totaling 24 minutes. Olivier Nkamhoua was on the court for 15 minutes, and Davonte Gaines played 10 minutes.

James struggled offensively, scoring just two points on 1-of-5 shooting. But he made up for it in other areas, grabbing six rebounds and dishing out two assists. He also blocked a shot, though he did turn it over three times.

Nkamhoua scored seven points and brought down seven rebounds, including four offensive boards. He also blocked a shot. Gaines led all of UT’s freshmen with nine points on 4-of-7 shooting, including making his only three-pointer he attempted. “Ticket” snagged three rebounds and got an assist, though he was yanked and placed on the bench after picking up a technical foul after showboating after a dunk.

With Tennessee losing so much from last season and Uros Plavsic likely unable to play all season, the Vols will need their freshmen to contribute. On Tuesday night, they did.