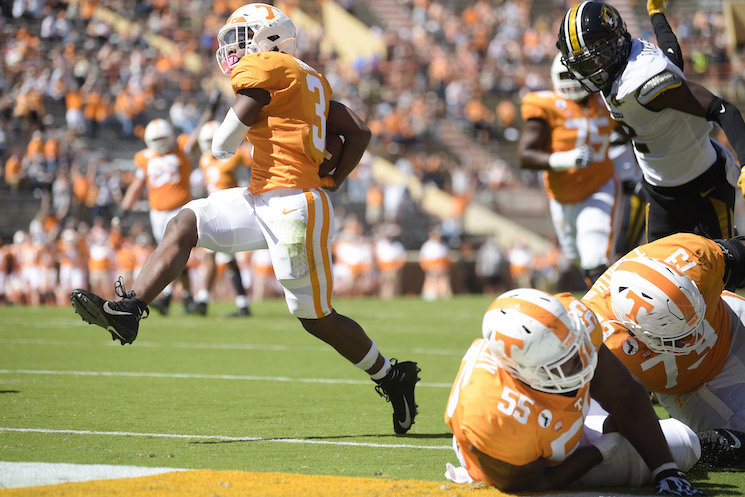 No. 21 Tennessee led from start-to-finish on Saturday afternoon inside of Neyland Stadium to defeat Missouri and remain undefeated on the young season.

The win for the Vols (2-0) didn’t come without drama in the second half. Tennessee led 28-6 following a two-yard Jarrett Guarantano rushing touchdown with 6:27 remaining in the third quarter. But following a 1-yard rushing touchdown from Larry Rountree and the Missouri defense then forcing Tennessee to punt, the Tigers were getting the ball back to start the fourth quarter with a chance to make it a one-score game.

Missouri immediately drove down the field courtesy of a 17-yard competition and 11-yard rush from Rountree. The Tigers were on the 27-yard line looking to punch the ball into the end zone and cut the Vols lead to one-score. That is until Tennessee senior safety Theo Jackson jumped a Connor Bazelak pass for an interception and returned it 36-yards to the Missouri 47-yard line.

“Theo made a nice play on the interception, got a good return there, which was good to see,” Vols head coach Jeremy Pruitt told reporters on Zoom following the game. “We had two times we had our hands on the ball in the backend, and we didn’t finish. You’ve got to make those plays.”

Jarrett Guarantano immediately found Velus Jones Jr. for a 22-yard reception following the turnover. After an Eric Gray rush for 11-yards and a defensive pass interference against Mizzou, the Vols had the ball at the 2-yard line. On 4th-and-goal, Guarantano snuck it in for his second rushing touchdown of the day to put the Vols up 35-12.

Missouri would not score again as the Vols were able to hold them defensively and the offense was able to run out the clock.

“I’m really proud of our players and our assistant coaches,” Pruitt said. “Just keeping on finding a way.

“I’m really excited about our team’s effort. How they continue to work hard to persevere through this challenging time.”

Tennessee’s offense began the game clicking on all cylinders.

The Vols led 7-0 at the end of the first quarter thanks to a 3-yard rushing touchdown from Ty Chandler. Tennessee out-gained Missouri 167-13 in the first frame. The Vols didn’t allow the Tigers to gain a yard through the air, while passing for 103 themselves. They rushed for 64 yards.

The defense wasn’t as crisp in the second quarter as it was in the first quarter. Missouri out-gained Tennessee 131 to 116 in the second frame, as the Tigers gained 59 rushing yards on the ground and 72 yards through the air. Tennessee’s defense stood tall despite some miscommunications, holding Mizzou to just two field goals.

“Defensively there was some good and bad,” Pruitt said. “Felt like we made some mistakes on third down. Threw a drive one time. And ended up giving up some points. All the things are correctable. We’ll go back and fix this.”

Shawn Robinson started the game at quarterback for Missouri, but was quickly replaced by Bazelak. The redshirt freshman finished 13-of-21 for 218 yards and an interception. Robinson was 1-for-4 with -4 rushing yards. Rountree finished with 84 rushing yards and a touchdown on 18 carries.

Guarantano finished the game 14-of-23 for 190 yards and a touchdown. He added 14 rushing yards and a pair of rushing touchdowns.

Tennessee now turns its attention to No. 4 Georgia. The Vols and Bulldogs will kickoff at either 12 or 3:30 p.m. ET next Saturday in Athens.