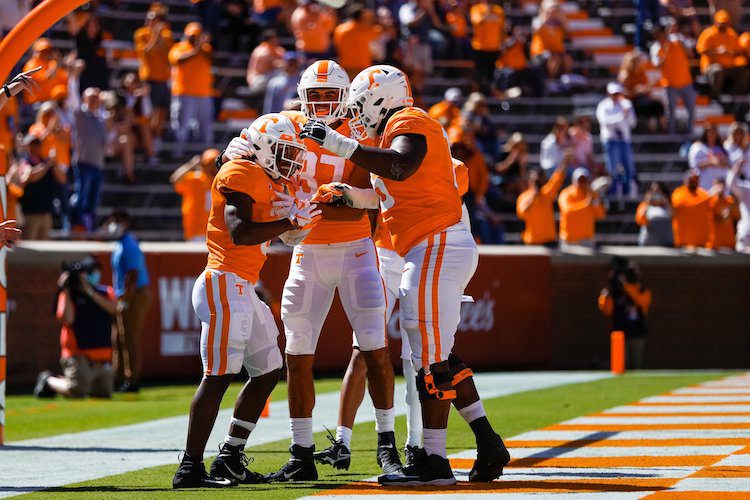 No. 14 Tennessee has opened as double-digit road underdogs in next Saturday’s matchup with the Georgia Bulldogs.

Tennessee (2-0) is a 14-point underdog to No. 3 Georgia (2-0) according to the line released by Circa Sports at the Golden Gate Hotel and Casino in Las Vegas.

Jarrett Guarantano was 14-of-23 for 190 yards and a touchdown. He did not throw an interception. Guarantano’s lone touchdown pass went to Gray from 13-yards out. Guarantano also had two rushing touchdowns.

The Bulldogs had quarterback issues in their opening win against Arkansas. With J.T. Daniels not cleared to play yet due to a torn ACL he suffered last season, redshirt freshman D’Wan Mathis made his first career start and struggled. Mathis completed 8-of-17 passes for 55 yards, and threw an interception. He was pulled for Stetson Bennett who was 20-for-29 with 211 yards and two touchdowns in the midst of leading Georgia to 32 straight unanswered points after trailing 10-5.

Bennett continued his success into the Auburn game. In the win, Bennett was 17-of-28 for 240 yards, a touchdown and no interceptions.

Tennessee is on an eight-game winning streak dating back to last season. UT’s winning streak is the program’s longest since an 11-game win streak spanning between the 2015 and 2016 seasons. It’s the second-longest win streak since the 1998 nation championship season.

As of the end of Saturday’s game, Tennessee is tied for the longest winning streak in the country with Notre Dame and Air Force.

Kickoff between the Vols and Bulldogs on Saturday afternoon in Athens is scheduled for 3:30 p.m. ET on CBS.