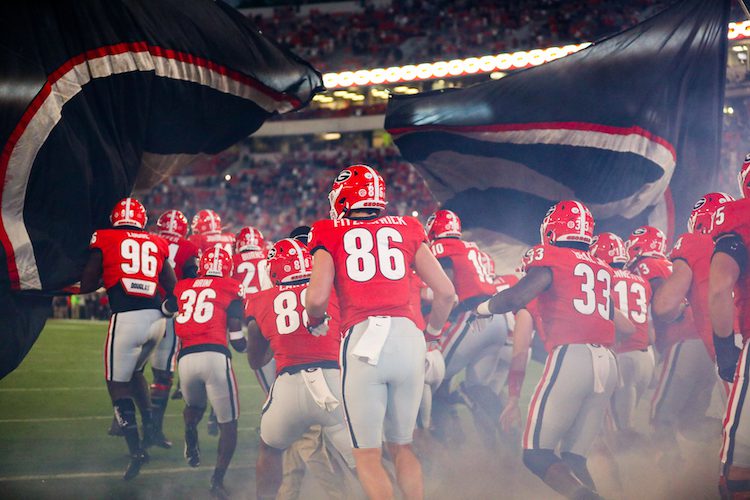 Here’s a complete preview of Tennessee’s opponent this Saturday, the Georgia Bulldogs.

The starting quarterback for Georgia on Saturday won’t be who we all expected it to be just a couple of weeks ago.

USC transfer JT Daniels is medically cleared but he’s likely No. 3 on the QB depth chart in Athens. Ahead of Daniels is redshirt freshman D’Wan Mathis, who began the season as QB No. 1. But a poor outing against Arkansas in the first game led to Mathis being benched and Stetson Bennett entering in relief.

Bennett has made the most of his opportunity. The former walk-on has been tremendous in a game-and-a-half since taking over at quarterback. Bennett has completed 64.9% of his passes, throw for 451 yards and tallied three passing touchdowns. He’s yet to throw an interception as he has seized the starting quarterback job in Athens.

There is plenty of talent around Bennett to make life easy on the redshirt junior. It starts up front with a group that replaces quite a bit of talent from a season ago, but an offensive line unit that has plenty of talent.

Center Trey Hill and right guard Ben Cleveland anchor Georgia’s offensive line. Hill, an All-SEC caliber player, started every game at center last season. Cleveland is one of Georgia’s most experienced offensive linemen. He’s played at a really high level over the past three years when healthy and is a force in the run game.

Flanking Hill and Cleveland is junior Jamaree Salyer at left tackle, Justin Shaffer at left guard and Warren McClendon at right tackle. The trio has been charged with the task of replacing NFL Draft picks Isaiah Wilson, Andrew Thomas and Solomon Kindley. The Bulldogs have allowed four sacks through two games.

The big uglies up front have paved the way for Georgia running Zamir White. The talented back has rushed for 159 yards and three touchdowns on 32 carries. White is averaging 5.0 yards per carry.

White is one of two talented backs Georgia offensive coordinator Todd Monken has to work with. Fellow back James Cook has only carried the ball 12 times this season due to a nagging shoulder injury, but is more than capable of reeling off big runs. Cook has rushed for 67 yards and is averaging 5.6 yards per carry.

Along with a strong running game, Bennett also has talented receivers to throw the football to. Sophomore receiver George Pickens is one of the most talented in the country and likely a future first round draft pick. Pickens has already caught two touchdowns through two games.

The other receiver the Vols must account for is redshirt sophomore Kearis Jackson, who enters Saturday’s game as Georgia’s leading-receiver. Jackson has caught 15 passes for 209 yards to this point and is averaging 13.9 yards per catch.

To go along with the duo of Pickens and Jackson, Georgia has a couple of big, physical tight ends that they’ll rotate in-and-out. Florida State graduate transfer Tre McKitty is expected to make his Georgia debut after missing the beginning of the season due to a knee injury. McKitty will likely rotate with 6-foot-7 John Fitzpatrick and 6-foot-7 true freshman Darnell Washington.

Georgia’s defense is without a doubt the strength of the team. The unit is arguably the best defense in the entire country. At each position of the defense, there are multiple Bulldogs that will play professional football.

In 2019, Georgia led the country in scoring defense (12.6 points) and rushing defense (74.6 rushing yards). The Bulldogs allowed only two rushing touchdowns last season (both by quarterbacks) to lead the nation and set a school record with the lowest total in the SEC since 1970.

Arkansas was held to 77 yards rushing on 28 attempts while Auburn had just 39 yards on 22 carries. Arkansas’ lone touchdown came on a 49-yard passing touchdown. The Razorbacks and Tigers combined to average just 2.3 yards per carry.

It starts with the Georgia defensive line and All-SEC defensive tackle Jordan Davis. He’s only produced five tackles and one quarterback hurry, but Davis receives so much attention that it opens it up for the rest of his teammates.

Davis is flanked by seniors Devonte Wyatt and Malik Herring who make up the rest of the Bulldog front that allows the linebackers to make plays behind them. The duo already has a combined eight hits on the quarterback through two games.

With Davis, Wyatt and Herring causing havoc on the interior, Azeez Ojulari gives opposing offensive coordinators nightmares off the edge. Ojulari led Georgia with 5.5 sacks last season and already has one this season to go along with nine quarterback hurries and 4.0 tackles for a loss.

It isn’t just Ojulari who makes a huge impact off the edge for the Bulldogs. Sophomore Nolan Smith, junior Quay Walker, senior Jermaine Johnson and 2019 Freshman All-SEC selection Travon Walker are just as dangerous off the edge. Smith already has 1.5 sacks and 1.5 tackles for a loss this year.

Senior Monty Rice and sophomore Nakobe Dean anchor the inside of the Georgia defense as two of the best inside linebackers in the country. The duo as already combined for 21 tackles and five quarterback hurries.

Georgia’s secondary is just as deep and talented as the front seven. Senior safety Richard LeCounte had his second straight game with two interceptions in the season-opener to give him seven in his career. LeCounte was ejected in the first half of the Auburn game for targeting.

Junior staring corner Eric Stokes made his first career interception against Arkansas and returned it 30-yards for a touchdown. Likely first round pick Tyson Campbell starts opposite of Stokes. Campbell already has two pass breakups on the season and a tackle for loss. DJ Daniel also plays a key role in the secondary as the backup corner. Daniel has one pass breakup on the season.

Senior Mark Webb and sophomore Tyrique Stevenson split time at nickle for the Bulldogs, while sophomore Lewis Cine starts at free safety next to LeCounte. Webb made his first career interception against Arkansas.

For the first time since 2015, Georgia is replacing its placekicker after All-American and 2019 Lou Groza Award winner Rodrigo Blankenship graduated and won the starting job with the Indianapolis Colts after signing as a free agent.

Redshirt sophomore Jack Podlesny is charged with the responsibility and is 4-for-5 on field goal attempts this season. He’s 4-for-4 between 20-and-39-yards, but has missed his only attempt from 40+. Podlesny also handles kickoff duties. Seven of his 12 kickoffs have gone for touchbacks.

All-SEC junior Jake Camarda handles the punting duties. He was named SEC Special Teams Player of the Week for the second time in his career after the Arkansas game in which he averaged 49.9 yards on seven punts, placing five of those at the 11-yard line or better. He boomed five punts that were 50-plus yards, including a 63 yarder. Camarda had one of the best seasons in program history last season as he averaged 46.8 yards per punt, which ranked second in school history.

With Dominick Blaylock out for the season due to a torn ACL, Kearis Jackson has served as the punt returner. Jackson has returned four punts for an average of 10.0 yards.

Sophomore running back Kenny McIntosh serves as the kick returner. McIntosh has returned three kicks for an average of 43.0 yards, ranking third nationally.