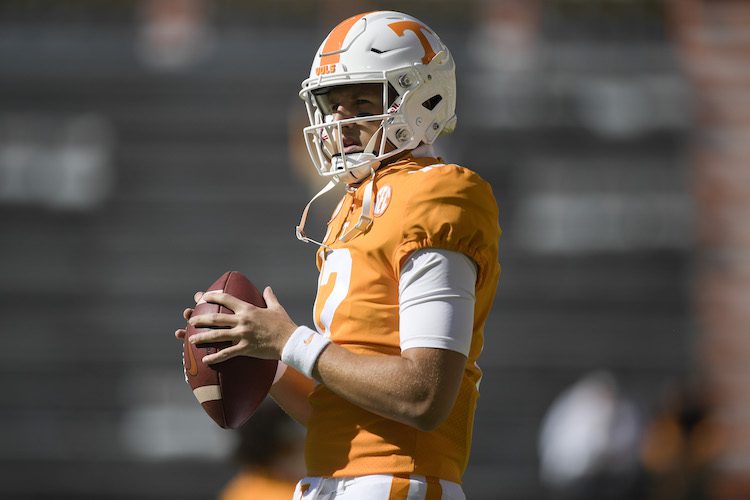 Managing editor Ben McKee answer your best questions about Tennessee athletics and anything else in our weekly mailbag.

“If something was to happen to JG who is the actual back up QB? All we heard all camp was Shrout looked good. What is your level of confidence at QB after JG?” – Logan Taylor

Ben: JT Shrout is coming into the game if something were to happen to Jarrett Guarantano. Jeremy Pruitt has not announced a backup quarterback publicly and continued to talk about an ongoing battle for the backup quarterback job, but that’s to maintain a competitive advantage. Shrout had a really nice offseason and fall camp, and would be the guy to come in. I have no idea how he would look in a game so to be quite honest, I don’t know my level of confidence is. For the sake of an answer, I’ll say a four on a scale of 1-10.

“Who does the weather help more? And how many quarterbacks does Georgia play this week?” — Samsmith

Ben: Georgia because the Bulldogs are stronger along the line of scrimmage. Tennessee’s offensive line is great, but this is the one game on the schedule where the unit isn’t better than it’s matchup — Georgia’s defensive front. With the other side of the line of scrimmage matchup, Tennessee’s defensive front hasn’t played all that well through the first two weeks of the season and Georgia’s offensive line is very talented.

I would be surprised if Stetson Bennett isn’t the only quarterback we see play on Saturday. Bennett will only get benched if he’s turning the football over and based on his start to the season, that would be surprising.

“Who wins in the trenches on both sides of the ball?” — Dylan Palmer

“If TN defense stifles the UGA offense, will we see Kirby switch out QB’s? If so, would it be Mathis or Daniels?” — Dylan Palmer

Ben: I don’t think so because Stetson Bennett does a good job of taking care of the football and the main focus for Georgia will be to run the football. Smart may try to energize the offense with JT Daniels if they’re struggling to move the football, but I would be surprised if we saw a quarterback other than Bennett. Georgia is going to rely on the run game and for him to make good decisions. I don’t see the Bulldogs asking him to do a ton that would lead to his benching.

Ben: Yes I am. Maybe it’s because he barely practiced during fall camp due to COVID protocols, but with as much as the offensive line as rotated guys, I’ve been surprised with how little we’ve seen Calbert despite Jerome Carvin, Cade Mays and Darnell Wright playing well.

“Which wide receiver do you see most likely to score on Saturday?” – VolJuice

Ben: Josh Palmer because he’s the best wide receiver Tennessee has and I believe he is Jarrett Guarantano’s favorite target. It also wouldn’t be surprising to see Jim Chaney try and get someone else involved, however. Georgia will be locked in on shutting down Josh Palmer and Brandon Johnson. That could lead to Jalin Hyatt, Velus Jones or Ramel Keyton scoring a touchdown.

“When will see Beckwith and Wideman?” — Cliff Swaim

Ben: It won’t be against Georgia. Dee Beckwith is working on scout team as he works back from an ankle injury and Malachi Wideman just isn’t ready right now.

“Cedric Tillman seemed to be making a push to start before the season started and I’m not sure that I’ve seen him on the field yet. Has he dropped off or could it be COVID related?” – Joseph Bennett

Ben: It’s been surprising based off of how he was talked about during fall camp. There haven’t been rumblings of him dropping off, which makes you wonder if his absence is related to COVID.

“Will the kicking game be better this week?” — @EskerHarrison4

Ben: It sure needs to be. These are the type of games where you have to be perfect on special teams in order to pull off the upset. Brent Cimaglia is going to be called upon in this football game and he’s going to have to make his kicks. It could be the difference in the football game if he doesn’t.

Ben: Your guess is as good as mine. It doesn’t appear he’s going to be on the field any time soon. Especially with Deandre Johnson and Kivon Bennett in front of him at linebacker.

“Your guess on who we add to this class?” — Stevie Duckett

Ben: I don’t have a great guess to specific players, but there are a couple of positions that Tennessee has to add to. The Vols have to get better along their defensive front and add depth to the secondary. More specifically, Tennessee needs to add some more beef along the defensive line and another edge rusher or two. Pruitt is also looking to add another corner to the class. Offensively, Tennessee continues to look to add at least one more offensive lineman.