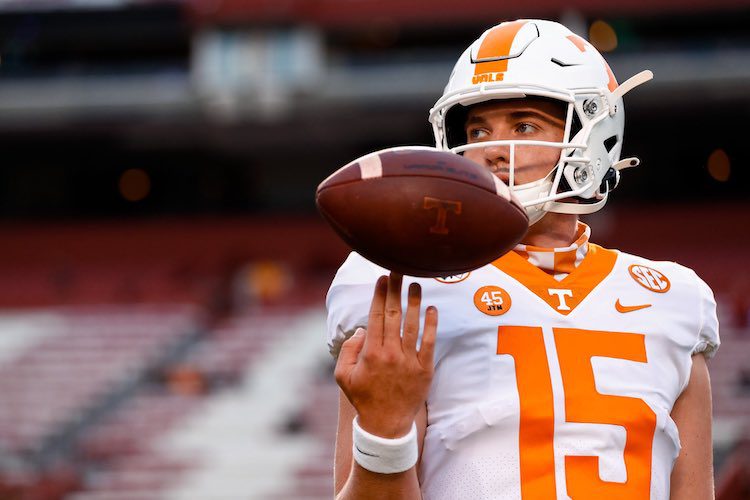 Tennessee held a scrimmage on Sunday afternoon a day after then-ranked No. 14 Tennessee fell to No. 3 Georgia 44-21 in Athens.

The entire team didn’t participate, however. This scrimmage was intended for those who weren’t able to have a true fall camp. Whether that be due to injury or because of quarantine protocols. Sunday provided those players with an opportunity to show what the coaches can do.

“It was really good,” Pruitt told reporters over Zoom on Monday. “It was good for a lot of players. A lot of energy. So it was a lot of guys that, to me, that kind of stuck out. So we have to continue to do this and give these guys an opportunity to continue to develop.”

True freshman defensive back Tamarion McDonald was one of the players who stood out to Pruitt. McDonald has yet to play this season due to offseason shoulder surgery.

“Tamarion, last night was the first time he’s really had any contact during fall camp,” Pruitt said. “I thought he was one of the bright spots of the scrimmage last night. So that was good to see.”

McDonald was considered a linebacker by most recruiting services, but Tennessee signed the Memphis native as a defensive back who would play the nickle and safety position. He was one of three to sign with the Vols out of Whitehaven High School in the 2020 recruiting class. His teammates, linebackers Bryson Eason and Martavius French, also signed with Tennessee and are currently true freshmen for the Vols.

True freshman quarterback Harrison Bailey was one of the players severely limited during fall camp. Bailey had to quarantine for 14 days after coming in contact with a roommate who tested positive for COVID-19.

“I think we took like 49 snaps, and Harrison (Bailey) took every one of them,” Pruitt said. “For him, that was really good because based off how our fall camp went, he didn’t get a lot of live action. We just didn’t have enough plays for him to get in there and get going. So it was good for him.”

Bailey signed with the Vols as a highly-ranked four-star quarterback out of Marietta, Georgia. He was considered a top 100 player overall in the country. Bailey is yet to have played this season.

The Vols are back in action this Saturday against Kentucky following their loss to Georgia. Kickoff between Tennessee and the Wildcats is scheduled for 12 p.m. ET on the SEC Network.