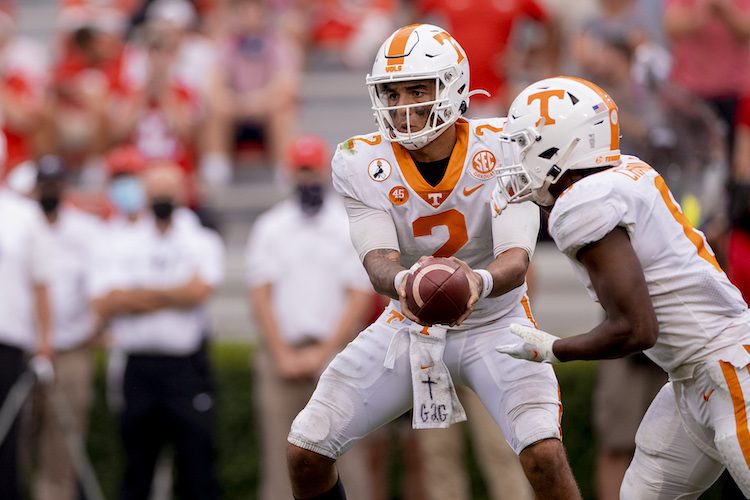 Jarrett Guarantano turned in a terrific first half performance against No. 3 Georgia to give the Vols a 21-17 lead at the break in Athens.

Guarantano was 11-of-13 for 124 yards, two touchdowns and zero interceptions in the opening half. He completed touchdown passes of 36-yards and 27-yards to Josh Palmer to give the Vols the lead.

But the second half didn’t go as smoothly. Guarantano threw an interception and he fumbled three times, two of which were recovered by Georgia. The Bulldogs picked up the final fumble and returned it 20-yards for the final touchdown of the game.

“Jarrett (Guarantano) is our quarterback,” Pruitt told reporters over zoom on Monday. “He gives us the best opportunity to have success.

The Vols offense struggled as a whole in addition to Guarantano’s turnover issues against Georgia. Tennessee had just 214 total yards of offense and was just 4-for-17 on third down. On the ground, the Vols rushed for a total of -1 yards. They rushed for 40 yards and averaged 2.0 yards per carry when sacks aren’t taken into consideration.

“I played quarterback,” Pruitt said. “When you have a lot of success, a quarterback gets probably too much credit. When you don’t have success, the quarterback probably gets too much blame.

“Offensively, our struggles Saturday were not because of one independent person. It was a team effort. We understand that. It starts with us as coaches, to put our guys in a better position to have success. And then from a player standpoint, we’ve got to own it and do a better job executing.”

Guarantano and Tennessee’s offense will look to get back on track this weekend against Kentucky (1-2). The Vols and Wildcats kickoff at 12 p.m. ET on the SEC Network.