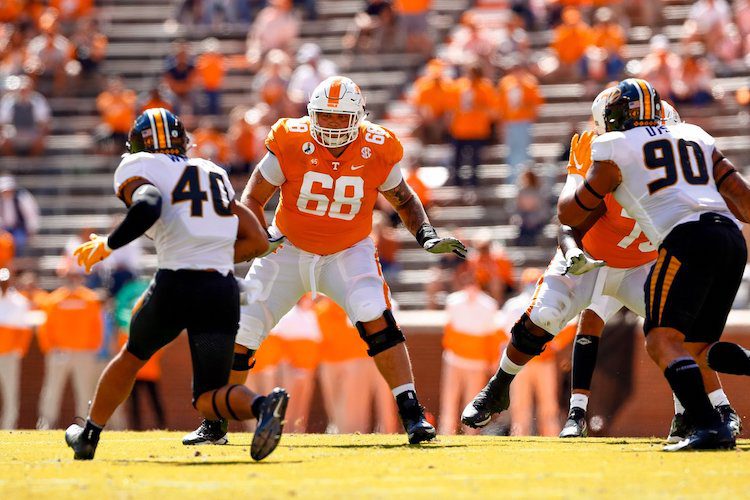 For players across the college football landscape, the 2020 offseason was full of uncertainty. This was especially true for Tennessee offensive lineman Cade Mays.

While other players got a glimmer of hope in August after the SEC, along with the Big 12 and ACC decided to play football this season, Mays was part of a handful of transfers that still wondered if they would have a season at all.

Mays, a Knoxville native, spent the previous two seasons playing at Georgia, but opted to spend his final two seasons of eligibility at the school where his father, Kevin Mays was an All-SEC offensive lineman in the 1990s, and where his brother Cooper, was playing.

“I had a good experience at Georgia,” Mays told reporters over Zoom this week. “Obviously, things didn’t work out, so I transferred here and I’m happy with where I’m at now. I’m happy to be a part of the family, taking in everyday and embracing it.”

Mays’ decision to join the Vols sparked excitement among Tennessee faithful. He was set to join an offensive line that already included All-American Trey Smith, Alabama transfer Brandon Kennedy and former 5-star prospects Wanya Morris and Darnell Wright. But it wouldn’t be until the eve of the Vols’ season-opener that Mays would find out his fate.

“There was a lot of uncertainty between everybody, not just me,” Mays said. “It was a great weight off my shoulders when I became eligible and everything got cleared. I was happy to be able to compete with my teammates.”

After the NCAA has cleared Mays to play, it was up to the SEC to allow Mays to actually see the field in 2020, but there was little hope that would happen due to a conference rule that didn’t allow non-graduate transfers leave one SEC school to play at another without having to sit out a season first.

But the SEC made an exception for all intraconference transfers because of the circumstances surrounding COVID-19 and an unprecedented football season. The ruling was helped in part by a number of league head coaches, athletic directors and school presidents, but whether or not that rule will stick around beyond 2020 will be reviewed at a later date.

For now, Mays has gotten to play and contribute to the Vols offensive line this season as well as play with his brother for the first time since their days as teammates at Knoxville Catholic High School.

“It’s been an unreal experience,” Mays said. “We got to play for a state championship in high school and won that. We got to do a lot of things growing up together. One of our dreams was to play high school football together. Now that’s a reality, it’s unreal. On my first play, I looked over and he was right next to me, so it was unbelievable to see that become a reality. Afterwards, we talked about it. We are just both ecstatic that we both get to go out on the same field at an SEC level and compete. It’s just awesome.”

In addition to making his dreams of playing SEC football with his brother by his side, Mays has also brought a plethora of SEC playing experience to Tennessee’s offensive line.

“For my whole college experience, I’ve played all five positions on the line, so I’ve embraced being able to play all five positions,” Mays said. “Wherever I am on the field, I try to put forth my best effort and help the guys around me. I’m not really concerned with moving around. I don’t think you necessarily need (the same) five guys all of the time on the field. Just like how the defense runs in different guys on different packages, playing different positions, I think it also confuses the defense and messed them up going against me at one spot this series and another the next. I think it’s a good change of continuity.”

Tennessee’s offense will need every ounce of that experience and more if it has any chance of upsetting No. 2 Alabama this week. The Vols and Crimson Tide kickoff for the 103rd time at 3:30 p.m. on Saturday. The game will air on CBS.