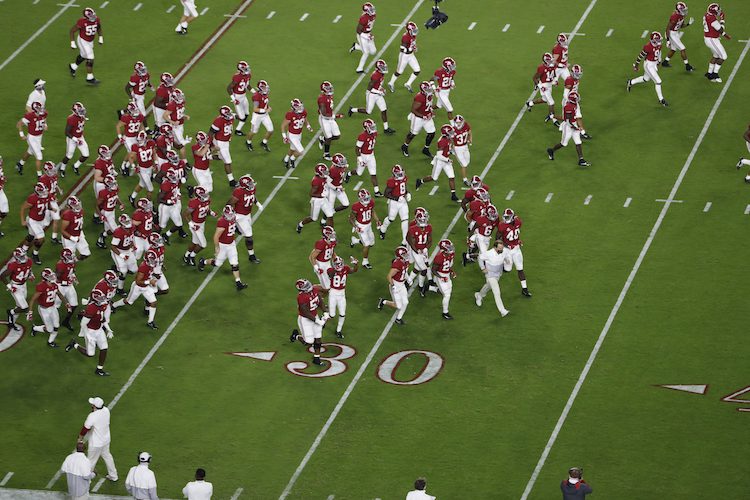 (Photo by University of Alabama)

Jeremy Pruitt’s talking point this week when discussing Alabama’s offense has been that it’s the best Alabama offense he’s seen in his lifetime. Those are strong sentiments from a 46-year old who has been around Alabama football all of his life.

Alabama’s offense is as diverse and balanced as possible. The Crimson Tide scored 41 points in last weekend’s top-three matchup with Georgia. It the 17th straight game that Alabama’s offense has scored 35-or-more points, which is the longest streak in major college football history.

It all starts with redshirt junior Mac Jones. The Crimson Tide’s starting quarterback has thrown for 1,598 yards and 12 touchdowns. He’s completing 78.26% of his passes and has thrown two interceptions. Most impressively, Jones has been efficient this season when throwing the deep ball. He is currently 22-of-31 (71.0) for 825 yards with eight touchdowns and no interceptions on passes thrown more than 15 yards beyond the line of scrimmage. 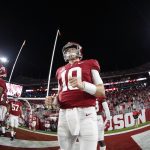 Jones has been terrific, but he also has tremendous weapons at his disposal. Senior running back Najee Harris, senior wide receiver Devonta Smith and junior wide receiver Jaylen Waddle are three of the best playmakers in all of college football and help Jones lead a prolific offense.

Harris is on pace to be Alabama’s all-time leading rusher. After carrying a career-high 31 times for 152 yards and one score against Georgia last weekend, Harris has totaled 2,893 rushing yards and 31 touchdowns for his career. This season alone, he’s rushed for 499 yards and 11 touchdowns in four games. Harris has rushed for a touchdown in 11 consecutive games dating back to last year’s Tennessee game. 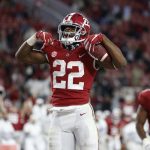 (Alabama running back Najee Harris — Photo by University of Alabama)

Smith is also rewriting Alabama’s record books. He’s totaled 156 catches for 2,592 yards and 27 touchdowns while averaging 16.6 yards per grab. His career totals all rank him in the top-10 for each receiving category.

On the other side of Smith is Waddle, who has been a big-play threat since stepping foot on campus. The junior continues to shine in 2020, registering 100-plus yard receiving performances in all four games this season to already tie for the third-most 100-plus games in a single season. As a junior, he is averaging 139.2 yards per game and posting a whopping 22.3 yards per catch average. 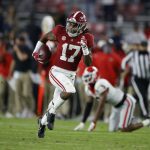 Smith and Waddle have combined for 63 catches, 1,040 yards and eight touchdowns. Sophomore John Metchie serves as an excellent third option at receiver for Jones. Metchie has caught 14 passes for 348 yards and three touchdowns. The trio are combining to average 18.02 yards per reception. 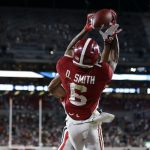 Alabama’s tight ends chip in to the passing game as well. Crimson Tide starting tight end Miller Forristall has eight catches for 102 yards and a touchdown. Forristall is also a big contributor as a blocker in the running game.

Jones, Harris, Smith, Waddle, Metchie and Forristall are able to be so productive within Alabama’s offensive because of the big uglies. The Crimson Tide’s offensive line is arguably the best in the country. Led by left tackle Alex Leatherwood and center Landon Dickerson, Alabama has allowed seven sacks this season, the fourth-fewest in the SEC. Jones is being kept clean, and Harris has plenty of holes to run through as Alabama is averaging the fourth-most rushing yards per game.

Backup running back Brian Robinson Jr. is also a key piece to the Crimson Tide offense. Robinson has rushed for 178 yards and a touchdown on 31 carries as a nice compliment to Harris. He’s averaging 5.6 yards per carry.

Alabama’s defense is good, as is the case every single season, but this Alabama defense isn’t as dominant as we’ve come to expect. The Crimson Tide have held the opposition to 10 or fewer points 35 times in 76 games dating back to 2015. But in four games this season, they’ve yet to hold an opponent under 10 points. This season they’re allowing 28.8 points per game.

Turnovers have been Alabama’s calling card. With three interceptions against Georgia last weekend, the Crimson Tide have forced at least one turnover in 70 of 76 games dating back to 2015. During that time, they’ve forced 127 turnovers.

The heart-and-soul of Alabama’s defense is senior inside linebacker Dylan Moses who is back in the saddle after missing the 2019 season due to a torn ACL. Moses leads the team in tackles (37), tackles for loss (4.5) and is second in sacks (1.5). Talented sophomore Christian Harris flanks Moses on the inside and is third on the team in tackles (26). 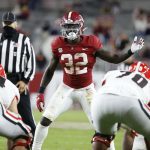 Alabama is somewhat young at the outside linebacker position. Junior Christopher Allen mans one of the outside backer spots, but freshman Will Anderson starts opposite of him. Anderson, a five-star who was the talk of fall camp, was 15 tackles and one for a loss through four games. Allen is second on the team in tackles for loss (4.).

Nagging injuries have bother Alabama’s defensive line. Redshirt sophomore Christian Barmore and redshirt junior LaBryan Ray have both struggled with consistency this season due to those injuries. Barmore and Ray have combined for 2.5 tackles for loss and 2.5 sacks. Barmore’s two sacks are the most on Alabama’s team.

Alabama’s secondary has struggled this season. Through four games, the Crimson Tide have yet to allow an opponent under 250 passing yards. Missouri threw for 253 yards, Texas A&M threw for 335, Alabama threw for 379, and Georgia threw for 269 yards.

The safety position is the strongest part of the Alabama secondary. Starting safety Jordan Battle is second on the team in tackles (28) and fellow safety Daniel Wright fourth (23). Wright is tied for the team-lead in interceptions with two.

Alabama may actually have a kicker. Yes, really. Sophomore Will Reichard is 4-for-4 on field goal attempts this year. Reichard’s long is from 52-yards out and is 3-for-3 between 20-39 yards.

At punter, Sam Johnson is averaging 35.4 yards on 10 punts this season. His longest punt traveled 45-yards and have downed four punts inside of the 20-yard line.

Jaylen Waddle is dynamic at wide receiver. He’s just as dynamic at returning punts and is a threat to return it for a touchdown each time he touches the football. Waddle is currently first in program history with a 19.3 yards per punt return average over his three seasons, nearly six yards better than second place on the career list.